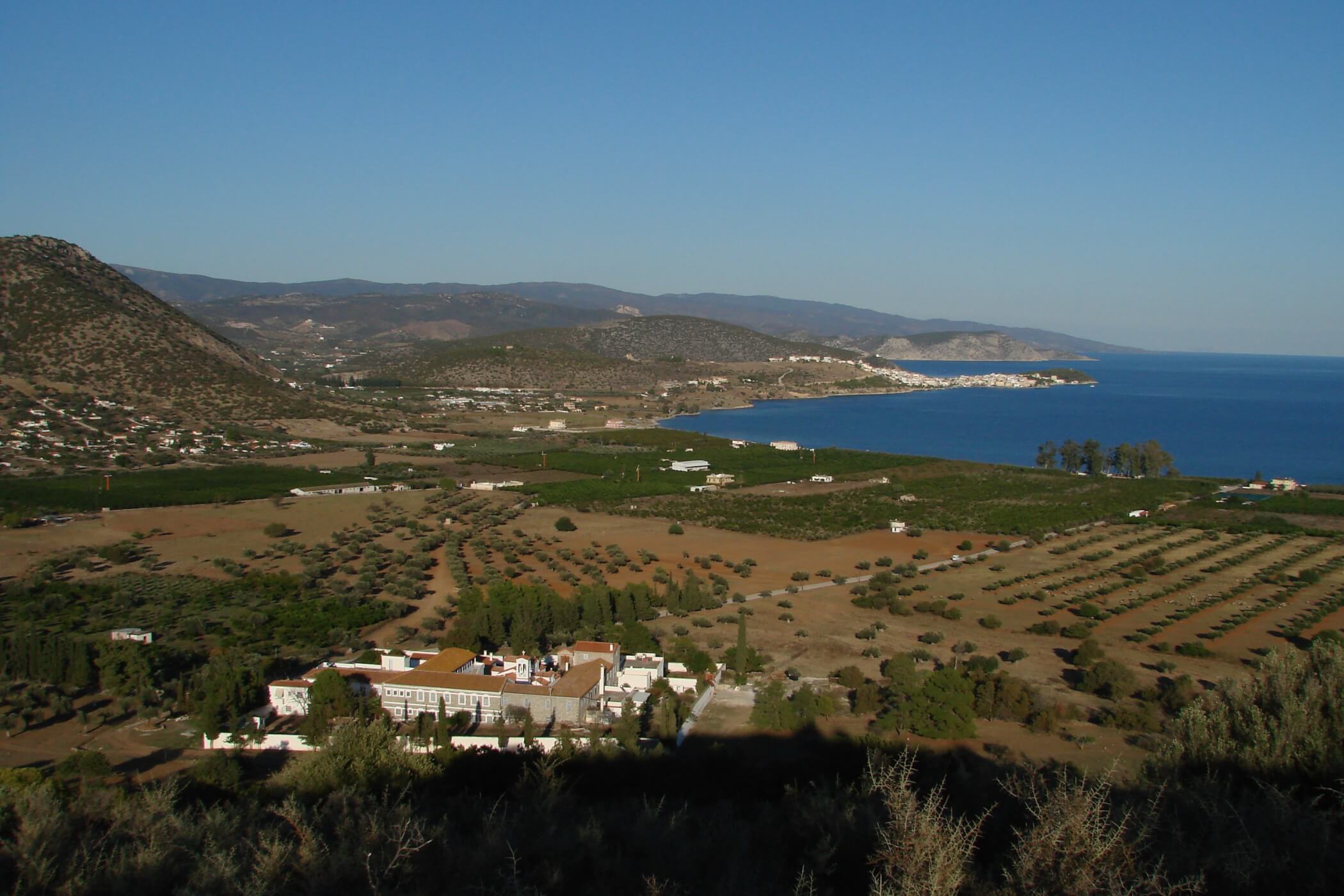 In the cove of the southern Gulf of Hermione, the “Porto Capers” at a distance of about one km. from the beach and 2 km. the town is the Monastery of St. Anargyroi. Valued sample Byzantine monastic architecture and famous for its springs with thermal waters, is built on the ruins of the temple of Asklepios between 9th and 11th century.

In a tradition of place here from old Asclepius healed people with the healing waters of the source and the foundations of the holy Saints Anargyroi continue to treat people … not only from physical illness. The beginning of the history of the monastery dates back to the 11th century. A.D. But from the 16th century. clear and accurate evidence and details of its history.

The contribution of the monastery has been significant in the `21 Match. When the beginning of 1826 began preparations for the convening of the National Assembly G. notables Hydra Spetses proposed to meet the Monastery “fiber syskefthomen orimos on common interests. Eidopoiisamen thereof and brothers Psara “.

Here there is an important library, “Karamaneios Library”, which bears the name of its founder, Hydra Metropolitan Prokopios Karamanou and is the single jewelry. It includes rare and old versions of classical, Byzantine and ecclesiastical writers, rows of old magazines and many foreign books. In the Library kept and Emmanuel Voulgaris file, brother of Prime Minister Dimitrios Voulgaris, documents containing important historical events of the region, 1800-1882 period.

Closely connected to the monastery is the thermal water which springs from the earth and concentrated in a small tank in the southwest corner of the Central Court. The analyzes were made indicating that the treatment capacity due to the underground deposits of minerals (sodium chloride, calcium, magnesium, sodium). Today the water has been declared unfit for daily use because of the high P.H. containing.

The Hotel Archontiko Anyfanti is situated on the ex-Anyfanti residence. It used to be a typical wealthy Arcadian mansion of the 1840’s and it sets itself as an example of the local architecture.

The Sikyon Coast is located in the most beautiful beach of the Corinthian Gulf, next to the pinewood forest of Xylokastro. Situated only 150 km from the Airport “Eleftherios Venizelos” and 120 km from the center of Athens .Hotel’s focal point is the historical villa, former residence of the famous Greek poet Angelos Sikelianos, a unique architectural style building of the 20th century. All rooms are decorated with warm, earthy colors and equipped with a king size bed or 2 single beds, fine linen clothing, workplace, individually controlled air conditioning, cable TV, free internet connection, refrigerator and safe box. All bathrooms feature All rooms feature bathtub or shower, branded toiletries, hair dryer, bathrobes and slippers. Angelo, is our genuine Italian cuisine restaurant, where the chef Stefanos Polyzos creates dishes with finesse and harmony, while pairing the fresh raw materials of the region with artisanal Italian pasta and Italian rice. Angelo’s fine dining experience is completed with a great selection of Italian wines, perfectly paired with the menu dishes and… the setting in the courtyard of the historic villa of the poet Angelos Sikelianos, built in 1916, is simply magical…! Physis Spa & Health Centre welcomes you in a natural, minimalist style, friendly […]

Hotel Byzantino welcomes visitors to Monemvasia who wish to experience first hand, the history and breathtaking beauty that Monemvasia offers. Immerse yourselves in the atmospheric byzantine surroundings that make our rooms unique. Hotel Byzantino and its guest houses offers modern comforts in lovingly restored traditional stone buildings, each with its own story to tell. The hotel offers daily a rich buffet breakfast based on local products and recipes which has been awarded by the Hellenic Chamber of Hotels with the official certification of Greek Breakfast. For more details, click on the following link. The breakfast buffet of Byzantino Hotel is offered every day at the Café Byzantino which is situated on the main square of the Old Town (known as “Kanoni”). The owner Anna Traiforou sees to the preparation and presentation of the breakfast. She always uses the best local ingredients while many of the dishes are based on traditional recipes that her grandmother has passed to her. The bread is kneaded at the hotel with whole wheat that is ground at the water mill of Talanta which has recently been renovated (well worth a visit). Many times Anna prepares the local speciality: freshly baked “propyra”, a savory “lagana” (flat […]