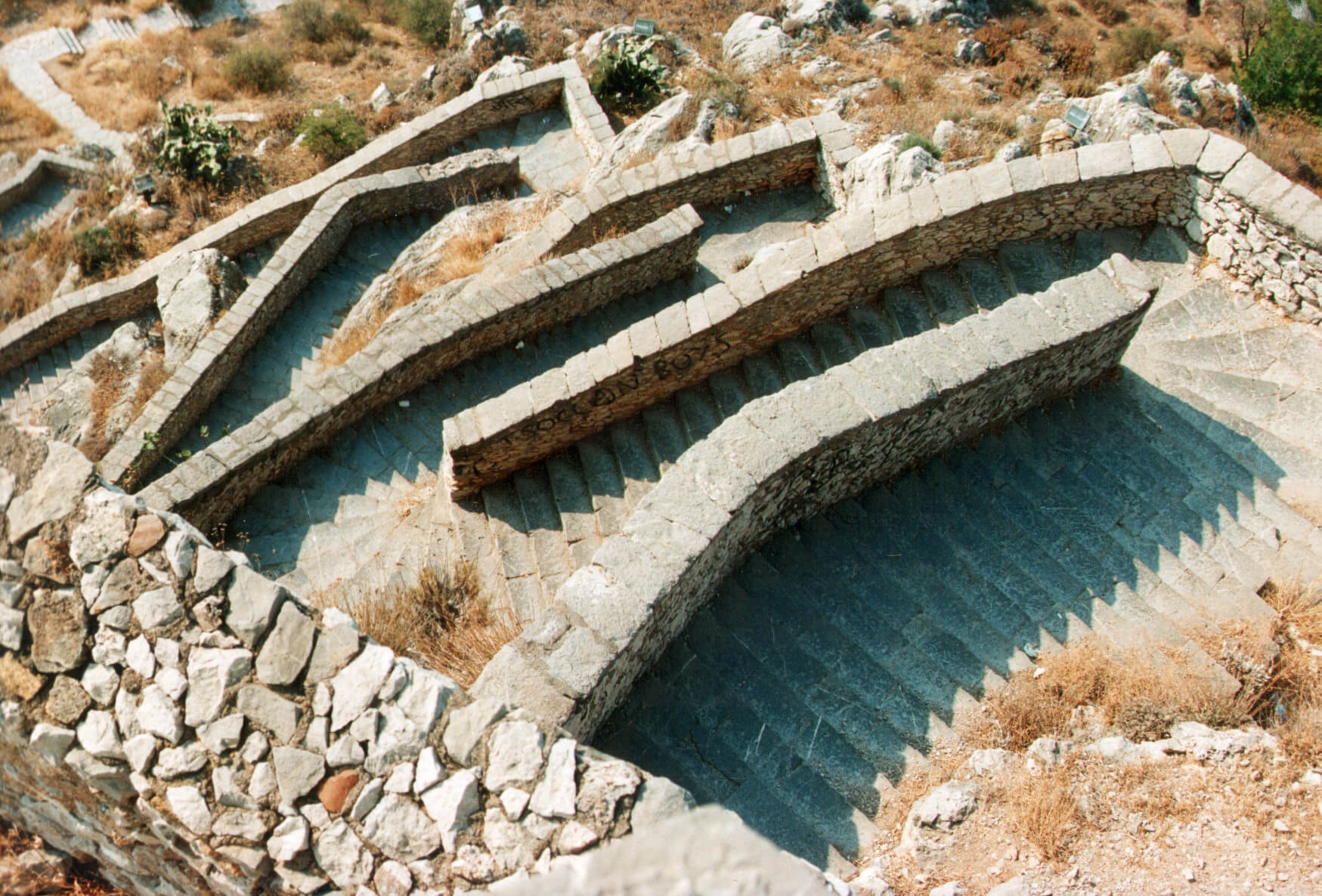 Palamidi is one of the finest castles in Greece and the largest and best preserved fortress complex of the Venetian.

Completed in 1714 in just a few years time record to serve the military and naval operations of the Venetians at the time.

It follows the natural line of the hill and becomes one with the landscape around him fully respecting the space and the purpose it was undertaken to serve. Kept in excellent condition, is one of the greatest achievements of Venetian fortification architecture.

The castle is located on the hill Palamidi, totaling 216 meters, to the point that dominates over the town of Nafplio and controls the Argolic bay.

O hill of Palamidi, which takes its name from the Homeric hero Palamedes, do not appear to have been systematically fortified until the second Venetian domination.

The Nafplion area was dominated first by the Venetians in 1470. During the first Venetian occupation, the Venetians made in strengthening and expansion of the castle of Akronafplia, without being preoccupied Palamidi. In 1540, Nafplio was conquered by the Turks.

Then for the first time utilized strategically Palamidi, although still unfortified, the Vizier Kasim Pasha, who during the three-year siege of Nafplio (1537-1540) kanoniovolouse the city from there.

The Venetians returned in 1686 and under Morosini again conquered the area, and even after a fierce battle for the conquest of the hill of Palamidi.

The Venetians then realized the strategic importance of many Greek ports, including Nafplion, and appreciated the position of Palamidi rock that protected physically entering the Argolic Gulf.

The «Yialasi» Hotel, comprising 13 apartment-studios, is built on top of a hill in the Yalasi area, 400 m from the sea and very close to the city of Ancient Epidaurus, in the eastern part of the Peloponnese.

The Kinetta Beach Resort & Spa inspires from its unique location and offers visitors a unique mixture of magical scenery. Sea, sun, interminable gardens and clear pools surround this resort. In this beautiful environment one can find a piece of heaven. Relaxing family moments, romantic scenery as well as inexhaustible moments of entertainment, for both young and adults. The Kinetta Beach Resort & Spa offers its guests a complete holiday package. The Kinetta Beach Resort & Spa is the ideal solution for a family vacation, as the price of a room includes almost everything… Succulent buffets, refreshments and drinks all day long. Within beautiful gardens and direct access to a long beach the hotel has 253 entirely renovated rooms some in small buildings and others in bungalows. There are also 3 suits with veranda or balcony. All rooms are equipped with T.V., air condition, hair dryer, safe and telephone. The rooms can accommodate 1 to 4 guests. Pets are not allowed in the guest rooms. Our front desk services include message service, car rental, excursions, airline ticket inquires, foreign exchange, credit card payments, postal and courier services. Medical assistance is also available on request. The children facilities include babysitting services, baby cots, […]

Olympia Golden Beach Resort & Spa is designed to be surrounded by water and not only from the stunning beach that lies in front of it , but also from 11 pools that are available to the guests all around the complex

Our 5* hotel is magnificently located on its own beach in the rural area of Kandia, only 20 minutes drive from the beautiful town of Nafplion, 15 minutes from Tolo and 165km from Athens.