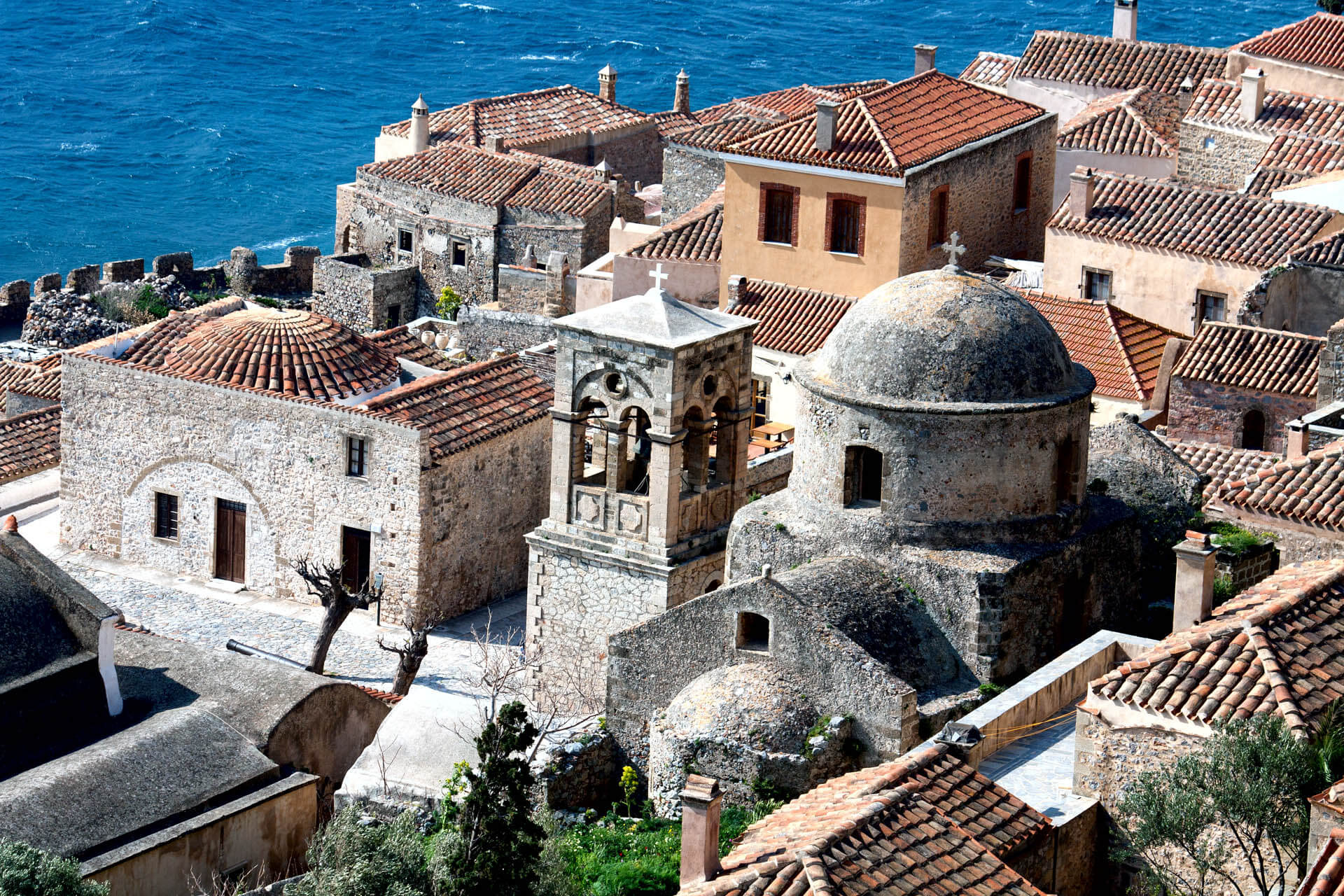 Monemvasia is built on a rock with unique access to the shore by a narrow strip of land from which it took its name. The physical location of the had made it ideal refuge during the invasions of barbarians.

Founded during the reign of emperor Maurice, in 583, when the inhabitants of the surrounding areas were trying to find shelter from the invasions of the Avars and Slavs.

The city seems originally founded on the highest plateau of the summit and later extended to the southeast, in place of smooth, sheltered and invisible from the Peloponnesian coast, additional features and privilege of a key observatory for many ships sailing the sea Myrtoo.

The settlement, though it had absolutely no water source became a naval and trading post on Sea Aegean streets.

The port city was double, in the north and south of the bridge that connected the rocky peninsula on the opposite shore. From the mid-10th century, the city began to grow dynamically, with the spreading of the settlement around the rock.

The urban planning of the settlement follows the natural terrain that allows the division in Acropolis, Upper Town and Lower Town. The Acropolis is located on the highest point of the rock.

It is trapezoidal in plan Byzantine fortress tower at each corner. In the northeast a circular tower probably served as a lookout or as a powder keg.

The Upper Town developed in the east of the Acropolis, at the top plateau, and is protected by a strong defensive wall, the ‘Goulas’ which is not continuous, since cliffs replace it in several places.

The only entrance is opened in the middle of the southern wall part at the end of a winding road that ascends from the lower city, the “Rides”.

This narrow gate leads through a vaulted corridor to a small plateau, north of which are the residence of the Venetian governor of the city Sebastiano Renieri (1514), and a little farther to the northeast, the great church of Hagia Sophia, catholic monastery originally dedicated to Virgin Hodegetria, built around 1150.

Poseidon Palace is the new hotel of Patras, which has been created in order to satisfy the most demanding visitors, such as businessmen, congress attendants, sport delegates, company representatives, families or guests that want to spend some time away in a summer or winter excursion. Situated only twenty minutes away from the center of Patras, it’s built among beautiful natural surroundings in front of the sea, offering the most glorious sunset view of the Patra’s gulf. Poseidon Palace is a luxury hotel, in minimal design, posessing 35 standard rooms, 2 junior suites, and 2 executive suites, all of which are decorated in different styles and colors in order to cater for the different personality of each guest. The multi-purpose rooms can be used for conferences, meetings, seminars, exhibitions, presentations and all kinds of receptions. In the Restaurant “WAVES” with the breathtaking sea view, our guests can taste the splendid recipes of our Chef, while “Main bar” offers them snacks, coffee, juices, and drinks in a cosy and warm atmosphere.If they want to enjoy lunch or dinner in their room, they can select the dishes of their preference from the Room Service Menu. Our Fitness Center, with the fully equipped free of […]

The Barceló Hydra Beach Resort ***** is an exclusive resort designed in contemporary style while retaining the essence of Greece. It is found in a very tranquil area of Argolida that is famous of its historical sights and located directly on the Aegean Sea. With spectacular views of Hydra Island, the resort has access to 3 pristine beaches with crystal-clear water for exclusive use of its customers. The resort is ideal for couples and families with children. It has a spa overlooking the sea that offers an extensive menu of massage treatments and a beauty salon. Tennis courts, football playground or beach volleyball is only part of hotel facilities to satisfy all tastes. For younger customers hotel offers mini club and kids pool. Bars and restaurants offer a wide range of international cuisine and theme dinners in buffet style with open kitchen or with individual service in exclusive a-la-carte restaurants. The resort offers various accommodation types: superior and deluxe rooms, bungalows and suites. All rooms have a terrace or a balcony to enjoy the sea or garden views. The hotel offers a wide variety of dining experiences. There are 4 restaurants offering various options for lunch and dinner, as well […]

Xylokastro is a small, beautiful, picturesque town, situated in the North of Peloponnesus, at the Corinthian Golf. It’s a place, which excellently combines the mountain and the sea, the cosmopolitan and the simplicity. It offers some fantastic beaches for swimming and sea – sports, and it’s home of one of the most unique pine tree forests in Greece, the famous «Pefkias». The 4-star Arion Hotel , situated on Pefkias beach in Xylokastro, features a restaurant a la carte, Spa with sauna, Hammam, hot tub, as well as an all-day bar. Surrounded by lush greenery, it offers recently renovated rooms and suites all equipped with free Wi-Fi throughout, satellite television, telephone, air conditioning, mini bar, hair dryer, safe. The hotel is fully renovated, and opened in July 2012. The Hotel offers you the following services and facilities, to make your stay enjoyable, relaxing, and creative: full breakfast (American type buffet) from 08:00am, room service 24 hours a day, wake up calls, room rental. Arion hotel is located just ~115km from Athens by car either by bus, from Kifissos central bus station or by train with Proastiakos. We can offer free transfer from/to train station upon request. Arion hotel is located in Pefkias, […]