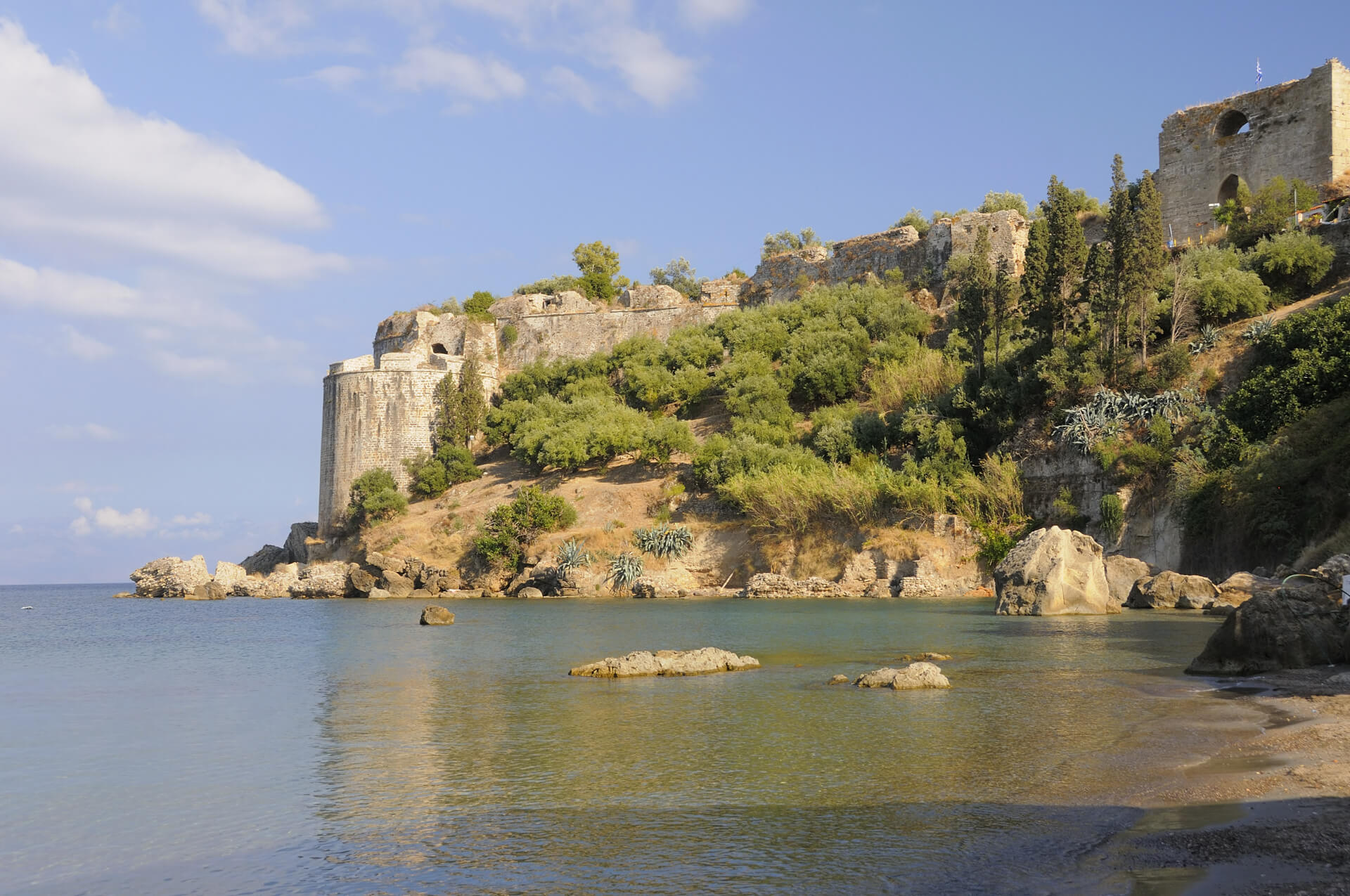 Venetian castle in Koroni and famous castle on the southwestern tip of the Peloponnese was the 7th AD century and was rebuilt and expanded by the Venetians in the 13th century. Over the next centuries the city flourished, but was constantly the apple of discord between Venetians and Turks.

Pausanias mentions two versions for the name of the ancient Koroni. According to the first, Koroni named by Coronea Viotia as founded by settlers from that city. According to the second, he was named a bronze Koroni (currency with a crow signal) that was found during the construction of the walls.

Probably one of the two versions is true, but the issue is related ancient Koroni was the present Petalidi village rather than the current (and medieval) Koroni at the location where the ancient Asini was. It seems that at some point the people of ancient Koroni migrated en masse little further south and they took the name of their city.

The main entrance is formed in a large square building, where the top, in the lower, resulting in a pointed arch. At the highest point, where there was room of the gate guard formed curved bow.

At the time of the castle’s edge existed before the entrance porch, which was maintained until the Greek Revolution, with pilasters, right and left, and above the entrance embossed with the Lion of St. Mark. Immediately after he opened an interior courtyard leading to the main entrance to the imposing tower, which still exists. The area of the yard occupied by small houses of the village.

Enjoy the hospitality and experience your senses at all hours of the day with the sky light that penetrates the impressive atrium which dominates the center of the lobby. Move in and live in a place that offers you all! Relax in the comfortable lounge, enjoy the warmth of the fireplace in the winter, enjoy aromatic coffee or tea, fresh juice or cold beer, drink wine or your favorite drink at the Sky Bar and taste delicious breakfast, lunch & dinner at Sky Bar Restaurant. Discover unique dining experience of international and Mediterranean cuisine at the new Sky bar restaurant and enjoy the a la carte menu or the wide variety of the buffet. Accompany your meal with a nice Greek wine from the impressive collection of our wine cellar. Enjoy the incomparable sensation of water and games in the elegantly designed swimming pool. A comfortable and serene setting for sunbathing, relaxation, refreshing cocktails and some light meals. There are lounge chairs and tables around the pool with umbrellas for shade and a pleasurable feeling of well-being. Perfect for revitalising exercise and ideal for swimming all year round. It features comfortable, padded lounge chairs for some peace and quiet. Enjoy fresh […]

Following the Country Club tradition, Trikolonio couples elements of the local architecture with classical and modern references. The decoration is complemented with authentic lithographs and engravings by artists such as Tsarouhis, Fasianos, Mitaras, Moralis, Galtemis and Pantelias.

Le Convivial Wine Mediterranean Spa expresses the blend of famous Asian massage techniques (for which Le Convivial Spa is famous for) with Mediterranean rich nature of herbs and ingredients from the blessed nature.