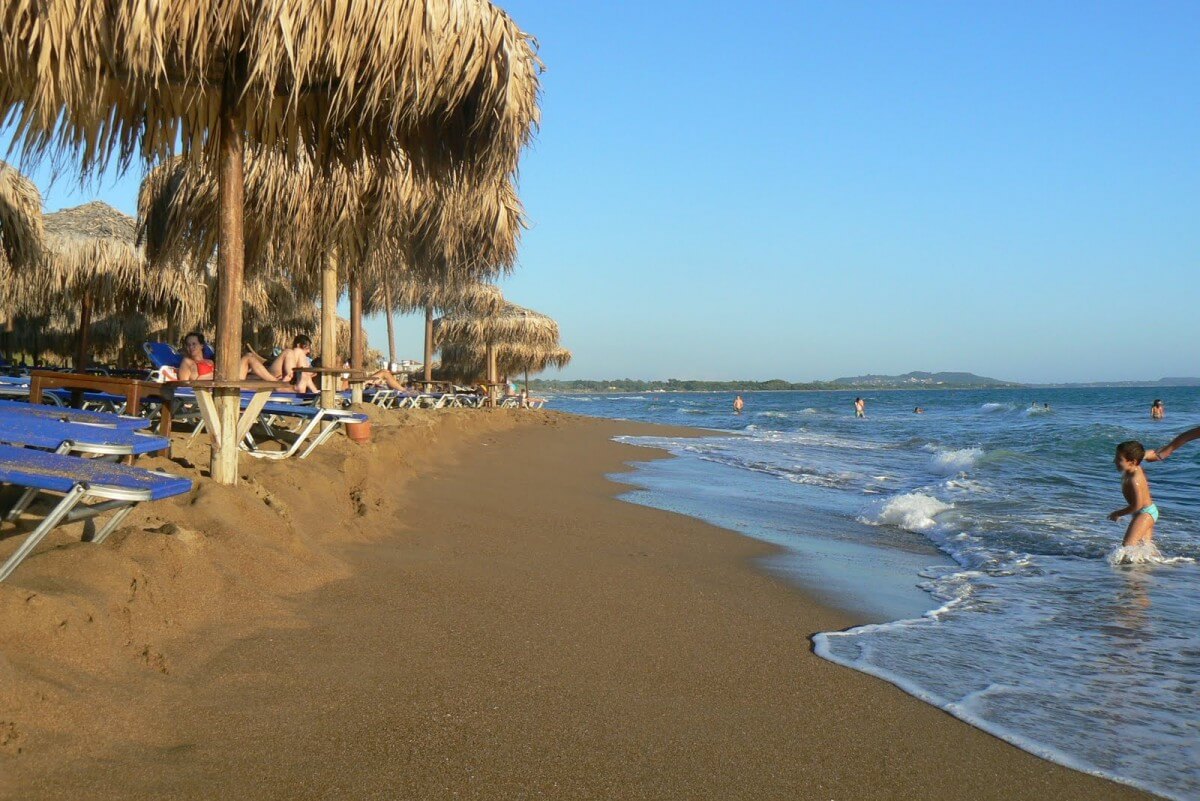 The Arkoudi is known for its beach. Generally know that the beach of Arkoudi is chosen mainly by young people. Arriving in the village will wonder where is the beach as the road is not shown.

Park your car and head towards the town center where you will find a small sloping alley with stairs that will lead you among the traditional houses, the hidden beach! Really with that arrive in Arkoudi not expect that this part conceals such a beautiful beach.

The beach is not long but a small cove with turquoise waters and a view of the colorful houses of the village reminiscent island. It is sanded and there are permanent umbrellas to create a tropical destination atmosphere.

The sea although located right next to the houses is clean and deepens gradually, so allowing the games in the sea! The beach is net for beach volley and showers for those who do not tolerate salt on them.

Beyond the daily swimming at the beach, many are left until the sun sets or even at night to take a dip. With it begins to fall the sun the party acquires a magic with the lights from the houses of the village light up slowly for the night comes, the orange color of the sun that is lost in the depth of the sea and all this accompanied by unique sound wave coming ashore. Many times friends bonfires on the beach and stay up late at night under the starry summer sky!

Welcome to the brand new apartment complex “Abelia Villas” situated in Finikounda of Messinia. Our complex covers an area of 6 acres and consists of three buildings. Each of them has two floors, while the whole complex offers a clear view of the Messinian Gulf, the islands Schiza and Sapienza, and the cape Venetiko. Our comfortable rooms and luxurious villas provide privacy, exude cozy warmth to visitors, and create a pleasant feeling with their soft and modern color combinations, their elegant and minimal décor and their luxurious amenities. The complex offers three different types of accommodation: the Family Suites, the Junior Pool Suites and the Junior Suites. All the suites are autonomous and fully equipped. They have spacious terraces, where you have the chance to isolate, unwind, and relax, gazing at the beautiful blue sea. Comfort is our top priority and is ensured by COCO-MAT mattresses in the bedrooms and the living rooms. Finikounda is a quiet seaside village on the southwestern part of Messinia, between Koroni and Methoni. It belongs to the Municipality of Pylos-Nestor and has 677 residents. Finikounda is located 295 km from Athens and 60 kilometers from the capital of the prefecture, Kalamata. Methoni and Finikounda […]

In the beautiful hill in Kokkinochari, where the beauty embraces the sky, where the horizon has no end, where the nymphs “dancing” an extraordinary landscape, we chose to marry the harmony of nature with man. One team implemented a big dream . And made the Melies.

In a historical building of the city, that was completed in 1890, the residence of an old bourgeois family of Patra, was created Maison Grecque Hotel.