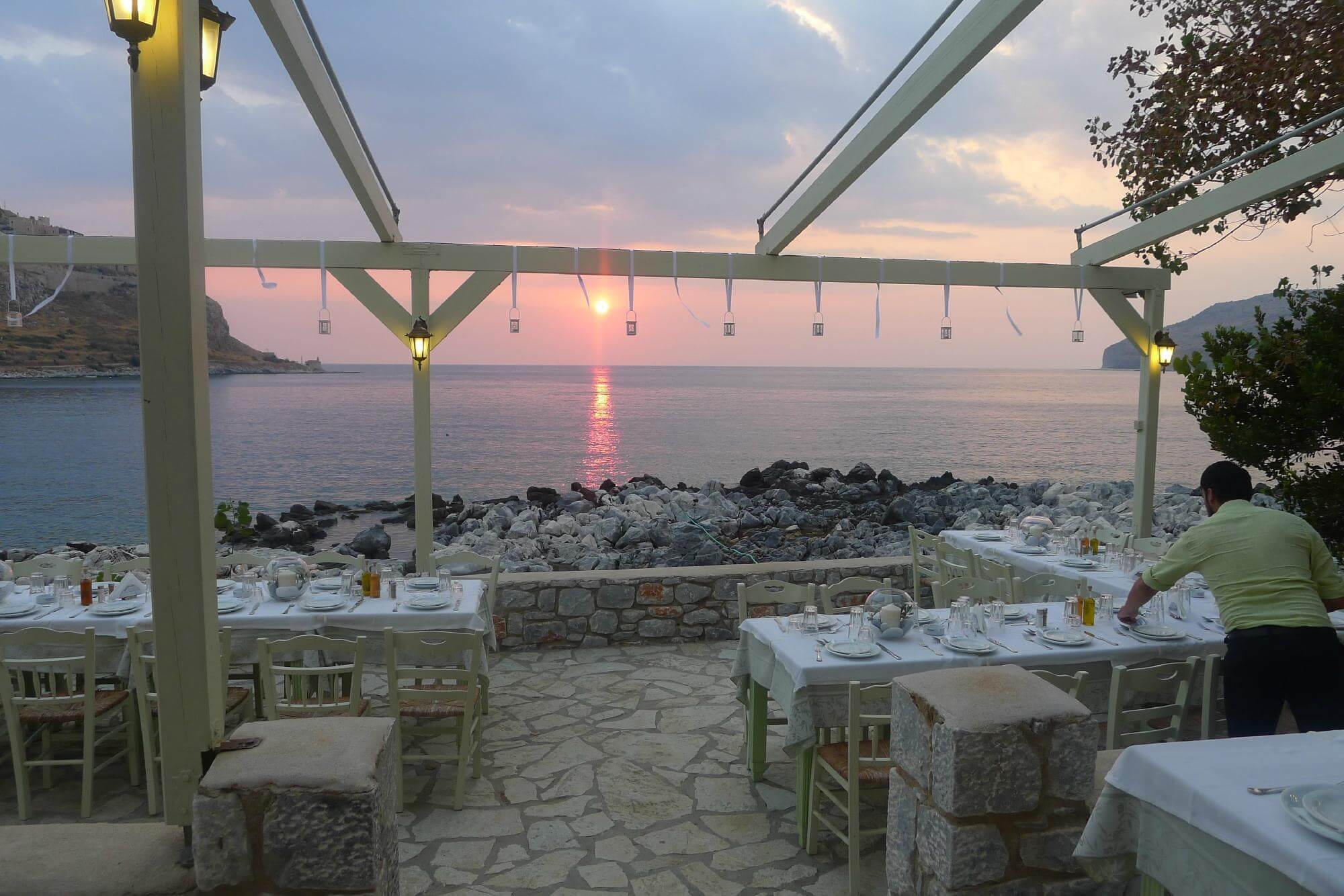 You can enjoy the area of Mani by choosing to stay in the area of Limeni and of course, Kourmas!
The name ‘KOURMAS’ is due to a date palm tree that existed between two plain rocks and as a result wouldn’t remain unnoticed. Such a tree was never seen around the area.

According to the legend, this tree was planted by a monk who used to leave in between those rocks, right next to where the rooms are today, in the monastery of Panagia Vretti.

In a magnificent location of Mani, the famous and picturesque Limeni, which is 4 km away from Areopoli and 82 km from Kalamata, you can find ‘Kourmas’.

In KOURMAS we promise to help you enjoy your stay in Mani, next to the lovely sea, with the sun warming you up whilst the moonlight and the winds of sea will keep you refreshed. In Mani, there are so many villages that you will be thrilled to explore each and every single one.

Visiting our tavern ‘KOURMAS’ you will enjoy a variety of local tastes including all differents kinds of fish, starring:
freshly caught fish from the local fishermen, the lobsters, which can found in the bay, the shrimps and the scampi, οur flagship dish couldn’t be any other than the lobster with pasta.

In the heart of Patras brand new Castello City offers a comfortable stay in excellently decorated spaces.Guests at the Castello City can enjoy a buffet breakfast in the specially designed room. Each room is tastefully designed to meet the personal needs and has high quality equipment. Patras is the third largest city in Greece, capital of the prefecture of Achaia and Western Greece. Located in the Peloponnese known for its natural beauty. Patras is a gateway to the west thanks to its geographical position and mainly because its port, which connects the country with many ports of Italy. Renowned for its famous carnival, the hectic pace of entertainment offered but also of important cultural destinations. A city with sites of great interest concerning ancient and religious history of the city. The architecturally outstanding new archaeological museum offers the opportunity for a unique tour of the past, while the imposing Bridge – the largest of its kind in Europe dominates the north of the city. Shopping and café of the city are just steps away and is ideal for professionals. Whenever you arrive at Castello City awaits the same smile, the same polite welcome. Why Castello City welcomes you in exactly the same way we […]

Camvillia Resort, a 5 star Boutique Hotel at Vounaria Messinia, opens its doors every year in the middle of May, to welcome its guests! Our vision was realised and we would like to invite you to an unforgettable stay. It is a unique opportunity to experience natures’ beauty and luxury in Messinia. Our resort is situated within an olive grove at Vounaria, a clay village where our villas and their swimming pools are amphitheatrically built over the sea staring at the unique fortress of Koroni. The authentic materials used in the resort, such as stone and olive wood connect you to the Vounaria atmosphere and make you feel at home during your vacation at Messinia. All rooms and suites at Camvillia Resort have a view of the olive grove and the endless blue of the sea and the sky. The swimming pool prevails in the centre of the resort. Close to our hotel, you will find the famous “Peroulia beach” with its emerald waters and the sandy coast. The sun at Messinia is mirrored at the stones between the slopes and penetrates the Olive tree branches, thus highlighting the grandeur of the Mediterranean scenery. We expect you at Camvillia Resort to offer […]

Prime Isthmus Hotel is located near at one of the most historical spots in the whole of Europe. It stands just a few meters away from a splendid human creation, the Corinth Canal.