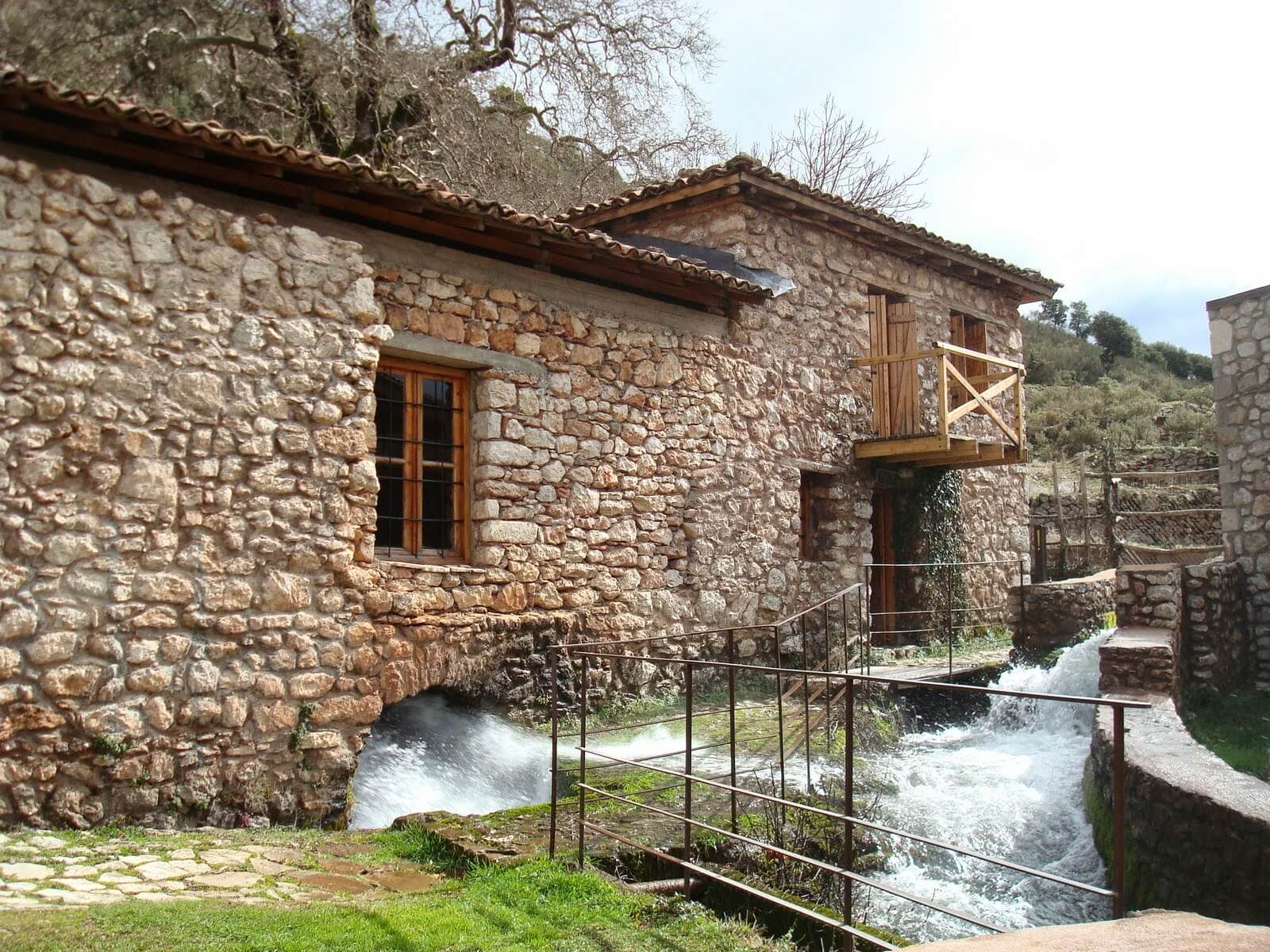 The Open Air Water Power Museum in Dimitsana, highlights the importance of water power in traditional society. Focusing on basic pre-industrial techniques that utilize water for the production of various products, linking them with the history and daily life of the local community through the years.

The Open Air Water Power Museum has restored traditional plants and water-powered mechanisms. The workshops are surrounded by dense vegetation and abundant springs, where you can navigate. Permanent kits have been restored to their original function.

The first building houses and fulling mill with a horizontal wheel. The adjacent small room, with fireplace, Miller lived with his family, as a rule multimember.

Outside the mill will see raki, which in the countryside after the harvest, to produce raki from the marc.

Just opposite, two-story building housed the residence of the tanner (above) and the tannery (below). The interior of the workshop is divided into zones corresponding to the various stages of leather processing.

The pavement leads to the plateau, which formed a natural reservoir, and ends at the powder mill. The gunpowder, a powerful element of the cultural identity of the region, kept alive in the memory and the stories of its inhabitants.

During the Revolution of 1821, the Dimitsana fed fight with this essential war material. Kolokotronis writes characteristically: “Gunpowder had, they made the Dimitzana”.

Here you can see the moving mechanism of a powder mill with a jerk, which had disappeared in Europe since the 18th century, while in Dimitsana used during the Revolution, but also to the early 20th century.

Welcome to our hospitable farm, Agroktima. This selection of gorgeous stone-built properties set in the quaint village of Leonidio offer guests the utmost in traditional hospitality. This seaside resort boasts deep blue waters and verdant mountains for a true Mediterranean experience. Live a unique holiday experience at the foot of imposing Mount Parnon, in a pleasant accommodation, which is an excellent base to discover Leonidio village and its surrounding  areas, as well as try out activities that will fill you with energy and unforgettable images. This stone-built property at the foot of Mount Parnon is a dream come true, thanks to the passion of Sarantos and Aggeliki for nature and Leonidio itself. Being travelers themselves, the hosts, who used to live in Athens, considered agrotourism as a chance to offer high-standard accommodation combined with tours in the farm, familiarizing guests with the earth’s magic. Situated right beneath the verdant slopes of Mount Parnon, within a fertile valley, Leonidio-the capital of Tsakonia-is surrounded by the grandiose Arcadic mountains and the peace prevailing along the frilled coastline of eastern Peloponnese. Leonidion or “Agie Lidi” in the Tsakonian dialect, was called the “Garden of Dionysus” during the ancient times…and it’s not hard to find out why. Being a favorite destination of nature lovers and those seeking […]

Hotel Byzantino welcomes visitors to Monemvasia who wish to experience first hand, the history and breathtaking beauty that Monemvasia offers. Immerse yourselves in the atmospheric byzantine surroundings that make our rooms unique. Hotel Byzantino and its guest houses offers modern comforts in lovingly restored traditional stone buildings, each with its own story to tell. The hotel offers daily a rich buffet breakfast based on local products and recipes which has been awarded by the Hellenic Chamber of Hotels with the official certification of Greek Breakfast. For more details, click on the following link. The breakfast buffet of Byzantino Hotel is offered every day at the Café Byzantino which is situated on the main square of the Old Town (known as “Kanoni”). The owner Anna Traiforou sees to the preparation and presentation of the breakfast. She always uses the best local ingredients while many of the dishes are based on traditional recipes that her grandmother has passed to her. The bread is kneaded at the hotel with whole wheat that is ground at the water mill of Talanta which has recently been renovated (well worth a visit). Many times Anna prepares the local speciality: freshly baked “propyra”, a savory “lagana” (flat […]

Elegantly redesigned the contemporary boutique hotel Amphitryon is one of the rare gems of the city of Nafplion.

Welcome to the Abeliona Retreat, in the village of Abeliona, that lies among the mountainous valleys between Messinia and Arcadia. This place will provide unparalleled relaxation and rejuvenation, thanks to its beauty and magical aura.