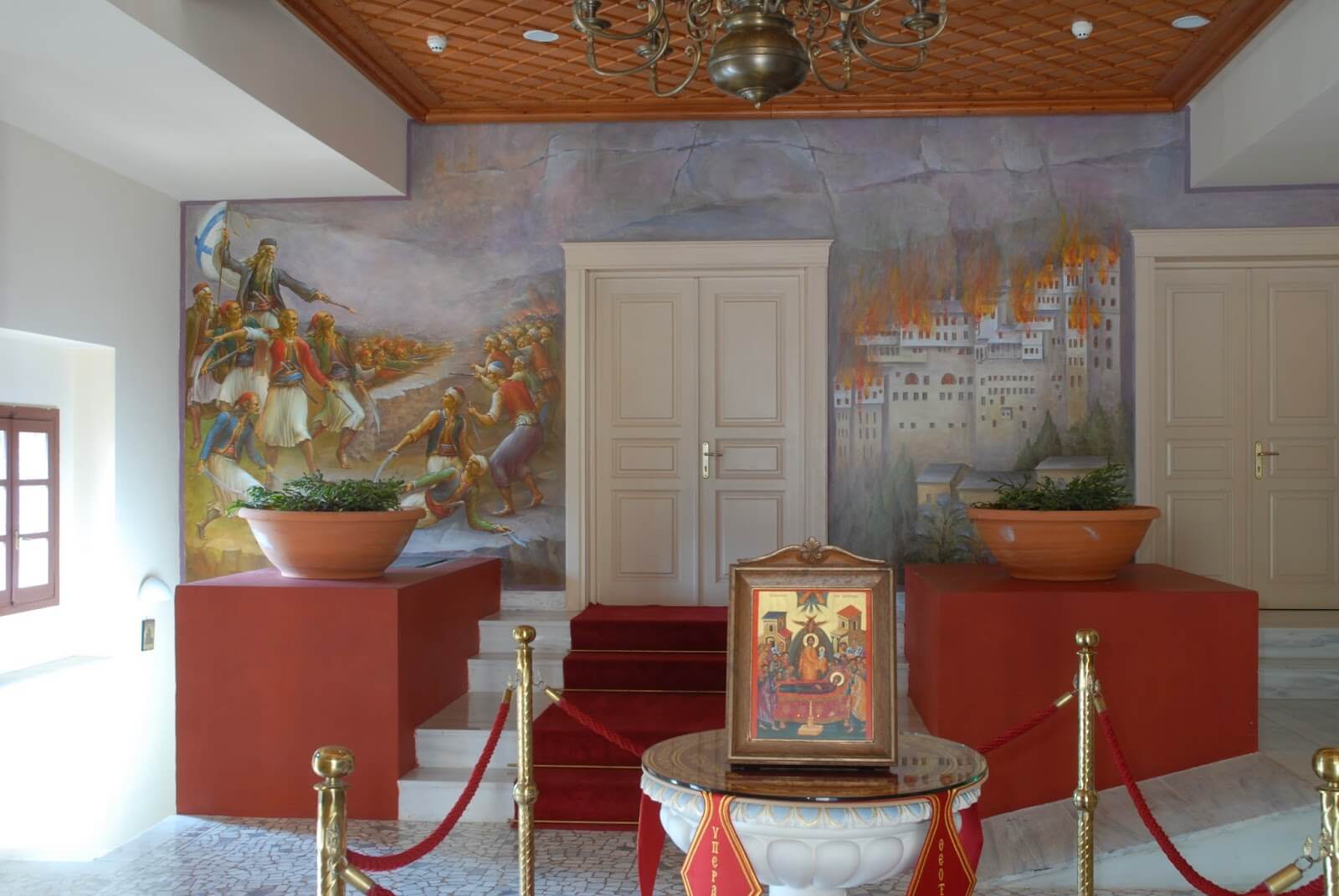 The Holy Monastery of Great Cave was built in 362 AD of the Thessalonians brothers monks Symeon and Theodore. He saw everyone individually a vision with the mandate to go from Jerusalem where they were, in Achaia and find the sacred image of Our Lady of mastic and wax, made by the Evangelist Luke.

After wandering, they met in Zachlorou region, the shepherdess Efrosini, which led them to the cave, where the Sacred Image was. With great reverence the two monks took the image out of the cave and cleaned by plants sacred space.

When burned branches from the heat was shaken violently dragon to the exit of the cave, which was killed by lightning. Souvenirs of this miracle are the representations while, saved until last, the bones of the dragon.

The area began to flock pilgrims built cells and slowly the monastery flourished and was a beacon of Orthodoxy and Hellenism through the centuries.

He played an important role in the revolution of 1821 and was an impregnable fortress against invaders. They know the proud, heroic response of Abbot Damascene in June 1827 to Ibrahim.

The image of Our Lady of Megalospiliotissas is work of Apostle Luke. It is believed that with the Gospel and the Acts of the Apostles gave the apostle. Luke spiritual child, the ruler of Achaia Theophilus. He bequeathed to his offspring. During the era of persecution, they hid in the cave. When they died or were killed for Christ, he remained in the cave until it was discovered in a remarkable way from St. Euphrosyne.

Set upon a slope covered with pine trees in Trikala Korithias, the stone-built Pigi Tarlampa offers traditionally decorated suites with unobstructed views of the corinthian Gulf or Mount Ziria and the village. It features a bar and restaurant with local delicacies. Featuring warm colours, stone details and wrought iron beds, all suites at the Pigi Tarlampa have a fireplace and seating area. Each includes a flat-screen TV and free Wi-Fi. The elegant bathrooms are stocked with luxury toiletries. Duvet feathers are provided. A breakfast buffet is served in the dining area and includes fresh eggs, juices and cheese. Drinks and coffee can be provided at the bar. The ski centre of Ziria is 6 km away from the hotel. A horse riding centre is nearby. Pigi Tarlampa Hotel has been welcoming guests since 18 Oct 2010 and has 21 rooms.

Lap up the most pristine spots of the northern side of the Messinian Gulf in painterly Peloponnese, up towards the green wilds and an endless sandy beach and set away from the famously pretty town of Kalamata, where lies Buca Beach Resort, a luxury 5 star Kalamata hotel. You can have it all, here at Buca Beach Resort. Behind the stunning, timeless, architecture, dwells a luxury 5 star hotel of unrivaled quality and finishes. Especially for those who value top-of-the-line gastronomy, luxurious amenities, and a cosmopolitan ambience right in the beautiful Peloponnese, Greece. Buca Beach Resort in Kalamata started operating in 2012, occupying a land of 35.000m², where it unfolds 53 rooms & suites and indulges powdered in luxury. With panoramic sea or garden views suites, and in combination to its impeccable facilities, a unique holiday experience is guaranteed. Bathed in natural light, and enjoying open, airy and inviting spaces, this luxury Kalamata hotel evokes a sense of living in the moment. This 5 star hotel blends stunning yet subtle design with a sense of stimulation and minimalism, with its sleek lines and unique structure. Earthy tones are beautifully combined with pastel and vivid colors. Tranquil yet solid lines are the […]

Helydorea is a warm, stone built guesthouse, with views of the Corinthian Gulf and the Roumeli mountains, waiting to host your short, or longer mountain getaways.