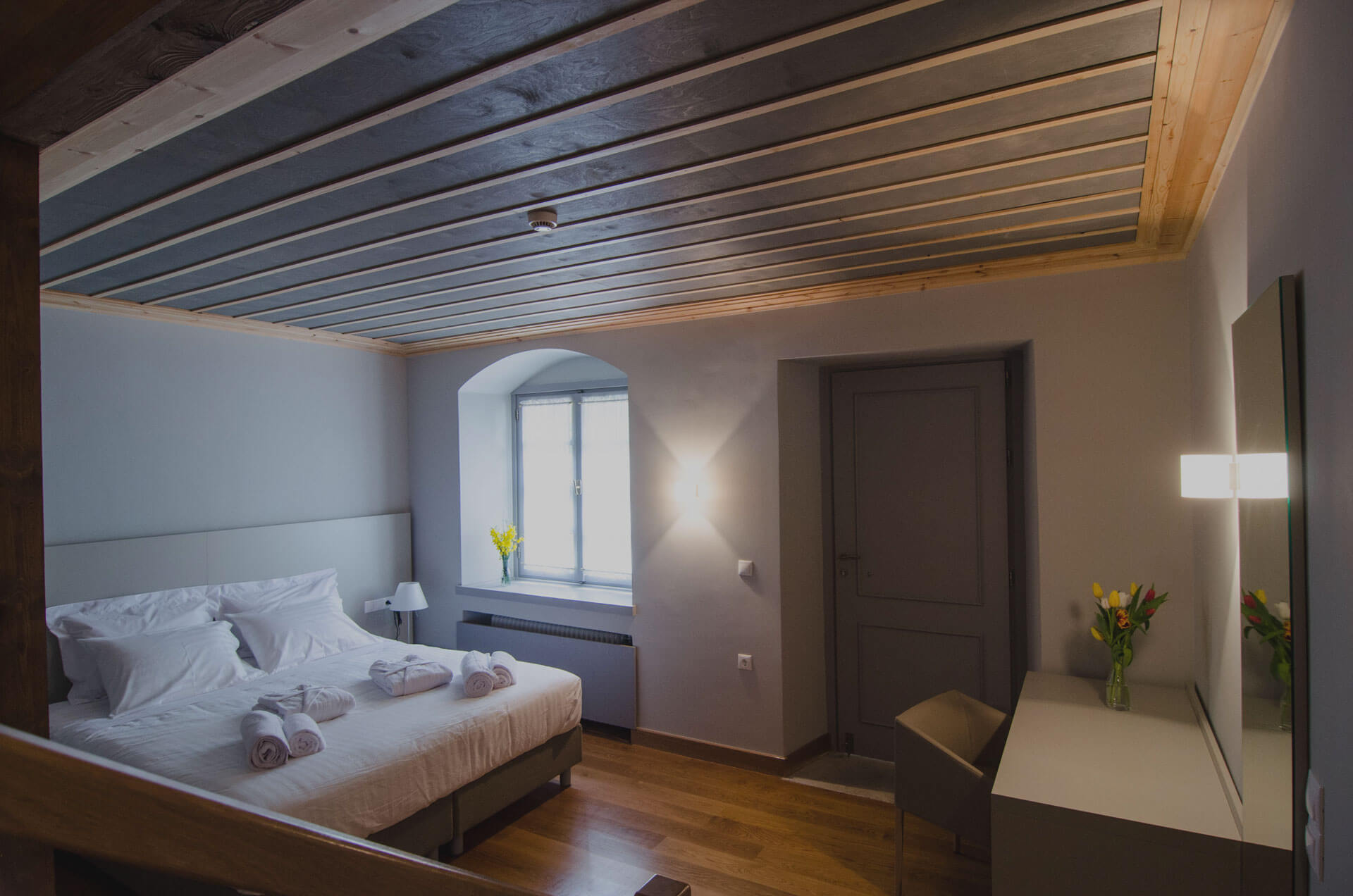 The Hotel Archontiko Anyfanti is situated on the ex-Anyfanti residence. It used to be a typical wealthy Arcadian mansion of the 1840’s and it sets itself as an example of the local architecture. On the ground floor, there used to be the weaving business of the family and a textiles shop.

On the back yard they used to paint the textiles and fabrics whilst on the entresol and floor it was the family’s house. During the years of the Greek War of Independence in 1821, the ground floor was used as a storage space for saltpeter that was supplied to the locals of Dimitsana in order to produce gunpowder.

The building has been fully restored according to its original plans and has been converted into a hotel by the Greek architect Giannis Kizis. Elements such as the well designed quoins, the fortress-like windows, the stone dome on the ground floor, the wooden balconies and the wooden ceilings with local patterns and designs will most definitely introduce you to the Arcadian architectural style. The building is regarded as a local treasure.

The Hotel Archontiko Anyfanti is situated in the beautiful village of Zatouna, just a stone throw away from the Historical Town of Dimitsana. The mountainous village is built at an altitude of 1050m and it has preserved its authenticity throughout the years. Its location is rather convenient since most of the region’s highlights are within a reasonable distance.

The town of Dimitsana is only 4 km away from Zatouna. There you can enjoy a stroll, visit the Open Air Water Power Museum and the Historical Library of Dimitsana. Lousios river is one of the most significant sites of Arcadia, where according to mythology Zeus had his first bath as a newborn. You will certainly enjoy the gorge of Lousios river and many activities such as rafting and hiking.

Pliadon Gi Mountain Resort & Spa is situated in the area of Kato Trikala in the county of Korinthia. It constitutes a truly valuable choice for your stay while visiting the Peloponese in the south of Greece and it is where you will experience a peaceful ambiance in perfect marriage to affordable luxury. Constructed according to the local architecture and bearing specimens of the Peloponnesian culture, it constitutes a natural extension of the village while, in parallel, it incorporates luxury services that have elevated the accommodation standards of the whole area. Pliadon Gi Mountain Resort & Spa is an all time favourite to those who wish to indulge to a peaceful getaway either during the winter or even in the summer months, since it combines both mountainous landscapes and a sea front at very close distance. This magnificent stone-built “village” is embraced by the nature’s wild beauty at a mere 1 ½ hour drive form the capital Athens. Spoil yourself to its beautiful surroundings and allow the well-trained staff take care of you. Take a deep breather and forget of whatever causes you anxiety and stress. This experience within the mountains has absolutely nothing in common with the vividness of a Greek island. The beach of Xilocastro […]

There are voyagers with a higher sense of aesthetics, seeking for distinct resorts, outstanding locations, unique holidays. Enalio Suites is built with hand-sculpted stone, upon the waves, along the Corinthian beach of Lecheo.