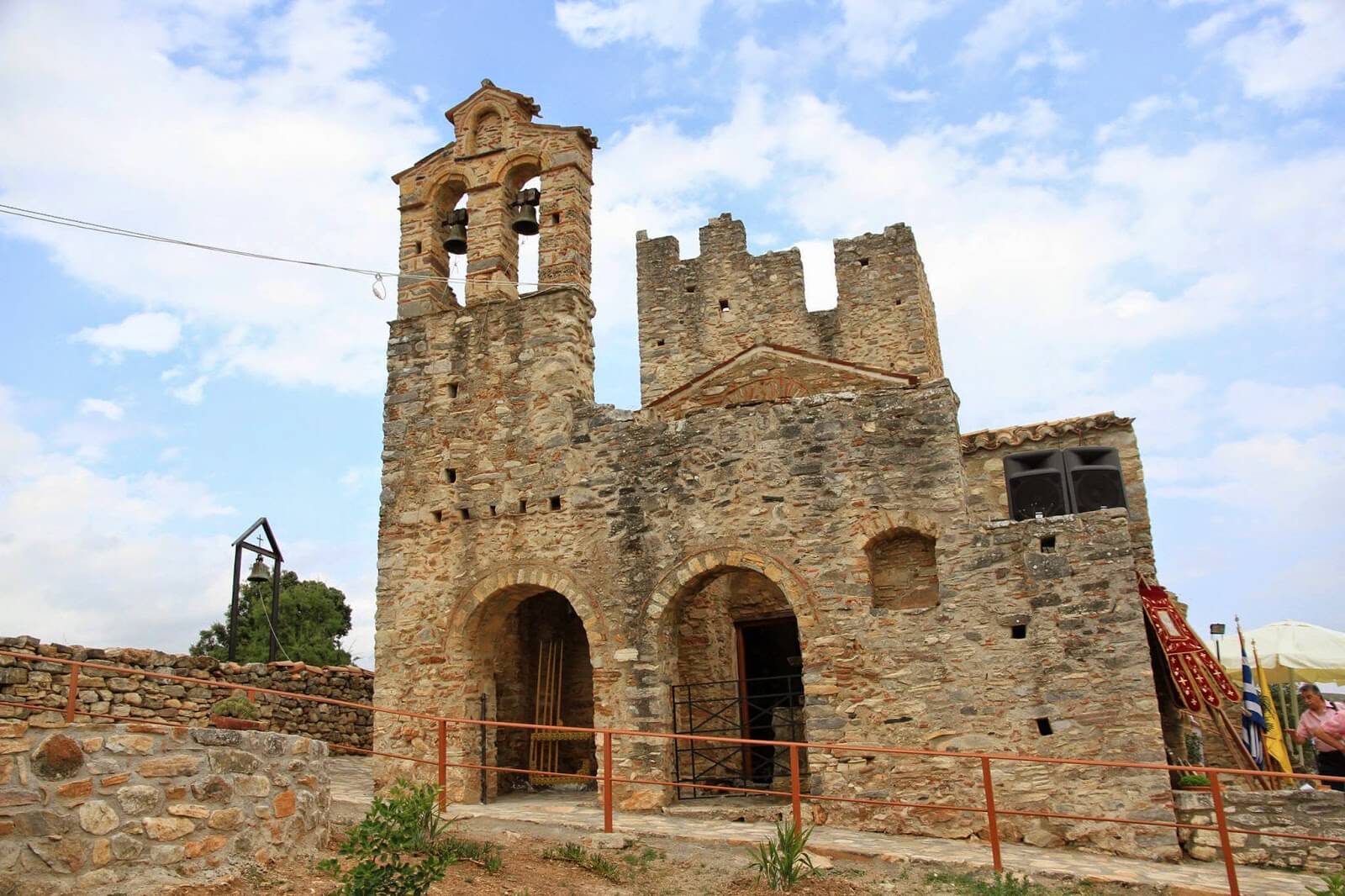 The byzantine chusrch Panagia Chrysafitissa is located in Chrysafa village 15km east of modern Sparta. It is a settlement with a recorded history of more than 1000 years. It thrived in the Late-Byzantine period and in the Ottoman period until it was destroyed after the Orlov events (Orlofika) around 1775.

There are several byzantine churches in the area among of which is Panagia Chrysafitissa. The older fresco in the church includes an inscription for the donors and a date:1290. Other parts of the fresco date back to the 17th century.

The ruins around the church indicate that it was part of a monastic complex. Apparently, the tower was also part of the complex and its construction could be dated with some certainty in the late 13th century, before 1290.

Peloponnese is one of Greece’s most unspoiled regions, renowned as much for its archaeological treasures as its outstanding natural beauty. Myths and legend lie around every corner of the mountainous landscape, which is dotted with colorful villages and fragrances by olive and citrus trees, herbs and flowers. An abundance of sandy beaches, cultural and historical experiences and warm Greek hospitality makes the region the ideal destination for family holidays. The sapphire sea shelves gradually, which is ideal for children and is situated on 10- kilometers sandy beach, with changing cabins and showers, sunbeds, beach towels, and umbrellas. This beach is awarded the “Blue Flag” as complying with the directives of the European program: water quality, environmental management, safety, services and facilities, environmental education and information. Sports campus offers a range of activities, from tennis academy and mini soccer to basketball and archery. Sport lovers find a myriad of challenges, including mountain biking, horse riding and excellent water sports.  In our Tennis Academy you may find comprehensive programs for all levels of players. The Academy is staffed by accredited professionals and is the only hotel in Greece to have visiting tournament players from Greece’s National Tennis Team as regular guest trainers […]

Seaside Boutique Hotel ‘Kyani Akti’ in Xilokastro is steps away from the sea, with a panoramic view of the Gulf of Corinth. Built in the early 1900’s, this charming Hotel was fully renovated in 2015 with new and modern amenities throughout. Situated by the sea in the heart of this beach and resort town, at Kyani Akti you will enjoy a most pleasant and relaxing stay; a soothing break from the ordinary. You have the option of selecting any Suite with a view of downtown Xilokastro, or any Suite with a seaside view of the ample Gulf of Corinth. The rest you can leave to us, and we will ensure a most comfortable stay. Hotel Kyani Akti offers Eight (8) Suites of which accommodate as follows: Six (6) Double Beds-These Suites each offer a King-Sized Bed Two (2) Triple Beds-These Suites each offer three (3) Single Beds, Oversized. Such beds can remain connected or separate, according to your preference. You are welcome to choose any Suite with either a downtown view or a seaside view: Seaside View Double Bed Suites overlook the Gulf of Corinth Downtown View Double Bed Suites overlook the retail and dining corridor of this beach town. […]

The Barceló Hydra Beach Resort ***** is an exclusive resort designed in contemporary style while retaining the essence of Greece. It is found in a very tranquil area of Argolida that is famous of its historical sights and located directly on the Aegean Sea. With spectacular views of Hydra Island, the resort has access to 3 pristine beaches with crystal-clear water for exclusive use of its customers. The resort is ideal for couples and families with children. It has a spa overlooking the sea that offers an extensive menu of massage treatments and a beauty salon. Tennis courts, football playground or beach volleyball is only part of hotel facilities to satisfy all tastes. For younger customers hotel offers mini club and kids pool. Bars and restaurants offer a wide range of international cuisine and theme dinners in buffet style with open kitchen or with individual service in exclusive a-la-carte restaurants. The resort offers various accommodation types: superior and deluxe rooms, bungalows and suites. All rooms have a terrace or a balcony to enjoy the sea or garden views. The hotel offers a wide variety of dining experiences. There are 4 restaurants offering various options for lunch and dinner, as well […]