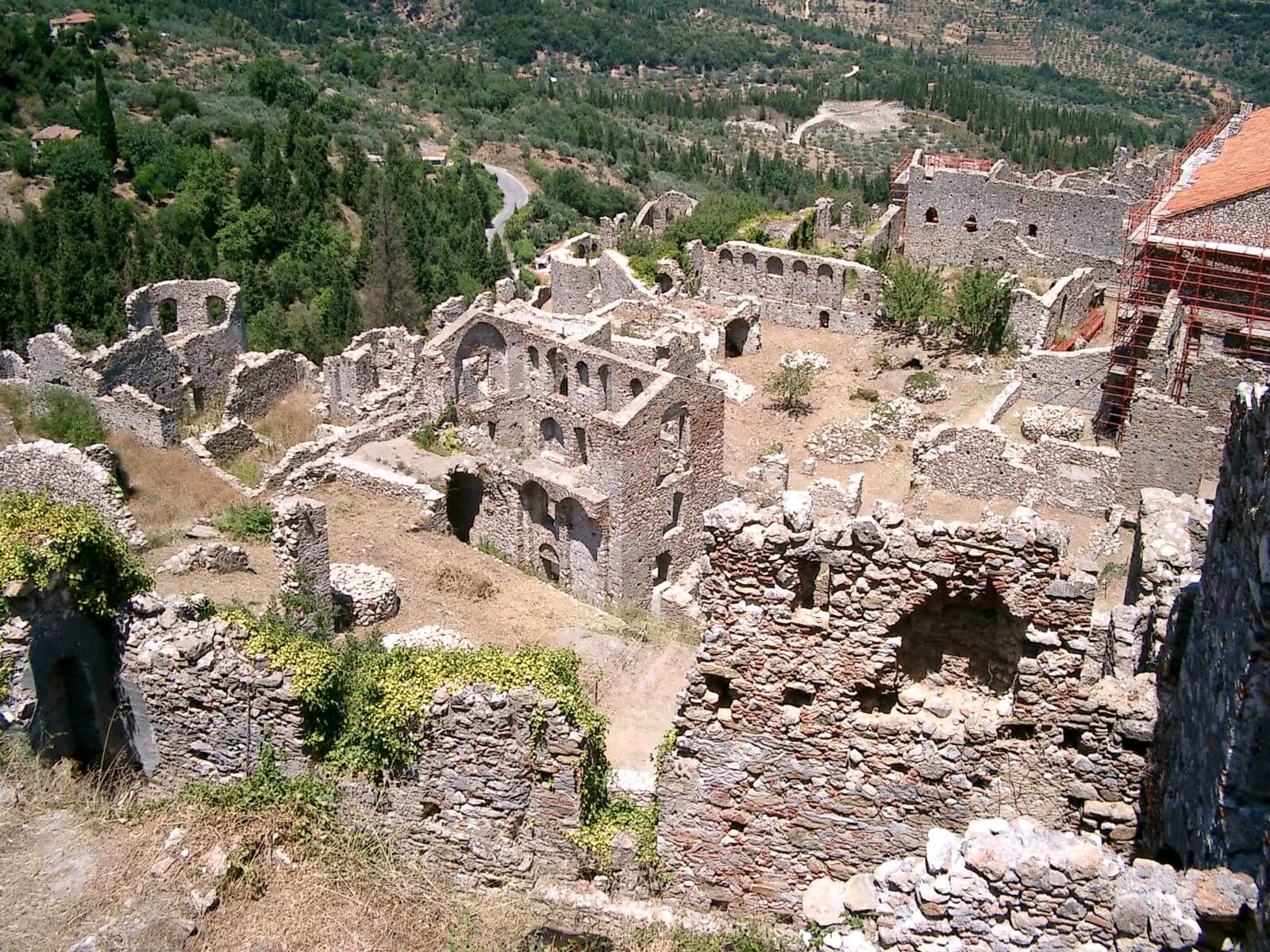 Mystras was a Byzantine city in the Peloponnese, close to Sparta. Today he is in ruins, although some buildings have been restored, and is a valuable source of knowledge of history, art and culture of the last two centuries of Byzantium.

The story “the dead city” of Mystras today begins from the mid-13th century, when completed the conquest of the Peloponnese by the Franks. In 1249 William II Villehardouin built his castle on the east side of Taygetus, on top of a hill with steep and conical form, called Mystras or Myzythras.

Mystras developed into a great castle and became the capital of the Despotate of Morea. He continued to be an important city in the following centuries until the first metaepanastatika years, and then abandoned. Today Mystras is by far the most important Byzantine monument in Greece.

The castle is located on a steep hill that dominates the fertile valley of the Eurotas, six kilometers west of Sparta.

It is very likely, the main reason for the decision to build the Frankish castle at this point was the proximity to ancient Sparta. For Franks, much more than for the Byzantines, the acquisition of a castle was more than strategic choice.

It was mainly showdown and success symbol. Especially a castle in Sparta must have special symbolic value for Westerners and even gave more weight and even internationally.

The establishment of Mystras connected to the first conquest of Constantinople by the Crusaders of the Fourth Crusade in 1204: the Byzantine Empire fragmented and the Peloponnese granted the Frankish family Villehardouins.

The layout of the castle is divided into three separate zones with considerable altitude difference: Upper, Lower and Exo Chora. In addition there is the citadel at the top.

In the Upper Country stand the palaces of despots. Built in different periods (13th to 15th century) and form a large complex where the throne room dominated.

In Lower Town, the Cathedral stands out, namely the church of St. Demetrius, where he was crowned on January 6, 1449, the last emperor of Byzantium, Constantine IAPalaiologos.

The Frankish castle on top dominates throughout the rock. It is accessible from the Upper Country and hiking ascent requires 10-20 minutes.

Mystras there archaeological museum housed in two-storey stone building of 1754, with interesting manuscripts, jewelry, reliefs and other Byzantine exhibits.

The castle ruins are largely but constantly made maintenance and recovery operations. Already restored palaces and churches.

The spacious rooms of the Arcadia Hotel are designed to offer comfort and increased functionality for the client. The modern furniture and clean lines create a relaxing atmosphere.

The Hyades Mountain Resort is located in Kato Trikala Korinthias. It offers well equipped chalets with magnificent views over the Corinthian Gulf and the slopes of Mount Ziria. Each chalet at Hyades has a fully equipped kitchen, living room with fireplace and luxurious bathroom with spa bath. Room service is available 24 hours a day. The Hyades Mountain Resort is surrounded by gardens with flowers and vegetables and offers reception with seating area, board games, library and bar. Guests have access to the gift shop of establishments selling local products, as well as ski equipment. Laundry services are also provided. Just half an hour from the house of Athens, half an hour from the seaside Xylokastro and within walking distance from the sports-Ziria Ski Centre, seven chalets overlook from above the Corinthian Gulf. Made entirely of natural materials, Finnish wood and stone, offer the visitor a unique feeling of warmth and independence. In each chalet you will find, among others, LCD TV, fully equipped kitchen, bath, king size beds and large balconies overlooking the idyllic environment that surrounds them. The Hyades Mountain Resort, also has a lending library, games and ideals landscaped gardens with 3,000 different herbs from all over […]