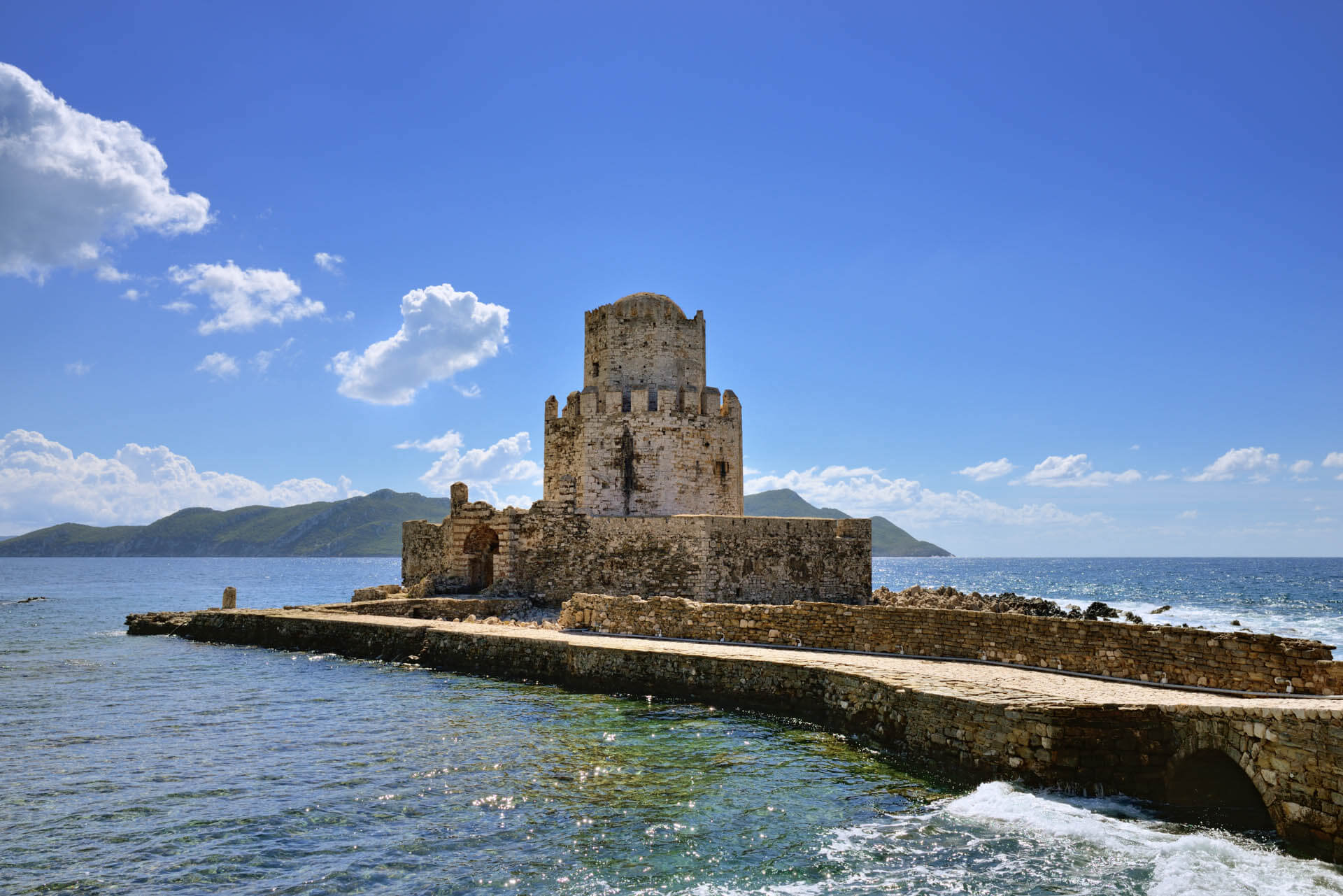 The castle of Methoni is one of the most important defensive sets of Greek space. Exemplifies castle occupies the whole of the southwest coast of the Peloponnese, with an excellent natural harbor, which in medieval times was a station on the pilgrim road to the Holy Land and cargo ships from West to East. The period of the castle edge positioned at Enetokratias period (13th-15th c.)

In antiquity Methoni was known as Pidasos name. Homer mentions it as one of the seven cities that Agamemnon offered to Achilles to appease his anger and convince him to reimburse the battle (Iliad, I, 149-153).

Pausanias (Messinian IV, 35, 1) and Strabo (Geography 8, 359-360) the call Mothoni and identify with the Homeric city. Characteristic is the reference of Thucydides for the weak walls of the fortified city in the 5th century. The form and extent of which remains to date unknown.

In Roman times the city wins its autonomy from the emperor Trajan and is enhanced with better fortifications. Pausanias even mention the existence of a temple of Athena Anemotidos and sanctuary of Artemis, and the city saved coins depicting the port.

During the early Christian period the port of Methoni flourished as a commercial center and refueling station for ships. During the Middle Byzantine period a series of seals dating from the 9th to the 13th century give us information for state and ecclesiastical functionaries of the city.

The Venetians first appear in the historical scene during the 11th century, when they have privileges on the free movement of the goods in various port cities of the Byzantine empire including the Methoni.

With the dissolution of the Byzantine Empire by the Franks in 1204 (DStafroforia) and Methoni will test their sovereignty. The Frankish period will last until 1206, when Methoni occupied by the Venetians and a treaty signed in 1209 ensured their dominance in the city.

During the first period of Venetian life in Methoni symona organized with the interests of Venice. The city was fortified and developed into an important commercial center as defined as mandatory stop for all Venetian ships traveling in the eastern Mediterranean.

The stone-build Nerida Boutique Hotel, situated in a unique locatio,n full of sounds & images from the flow and the natural richness of the river Lucius, gently harmonizes with the Arcadian mountain scenery and the tradition of the historic city of Dimitsana. The unique location in which the hotel Nerida Boutique Hotel is built, may be a separate base for excursions and explorations in this magical place where dominates the historic city of Dimitsana with its many monuments and monasteries , quaint cobbled streets and mansions and the natural paradise of Lucios river gorge that extends up to Karytena and the southern limits of Arcadia . In short distance , the mount Mainalowith beautiful traditional settlements , the ski center and the unique pine forest can offer special thrills and delights throughout the year . This authentic residence jewel will seduce its guests,offering unbelievable peripheral view, starting from the town center and Lucio river and ending far to the southern plains of Arcadia, that lie in the background and an environment with unique aesthetic excellence that will contribute to a complete spirit & body revitalization in the magnificent city of Dimitsana. The hotel is built on 3 levels , just […]