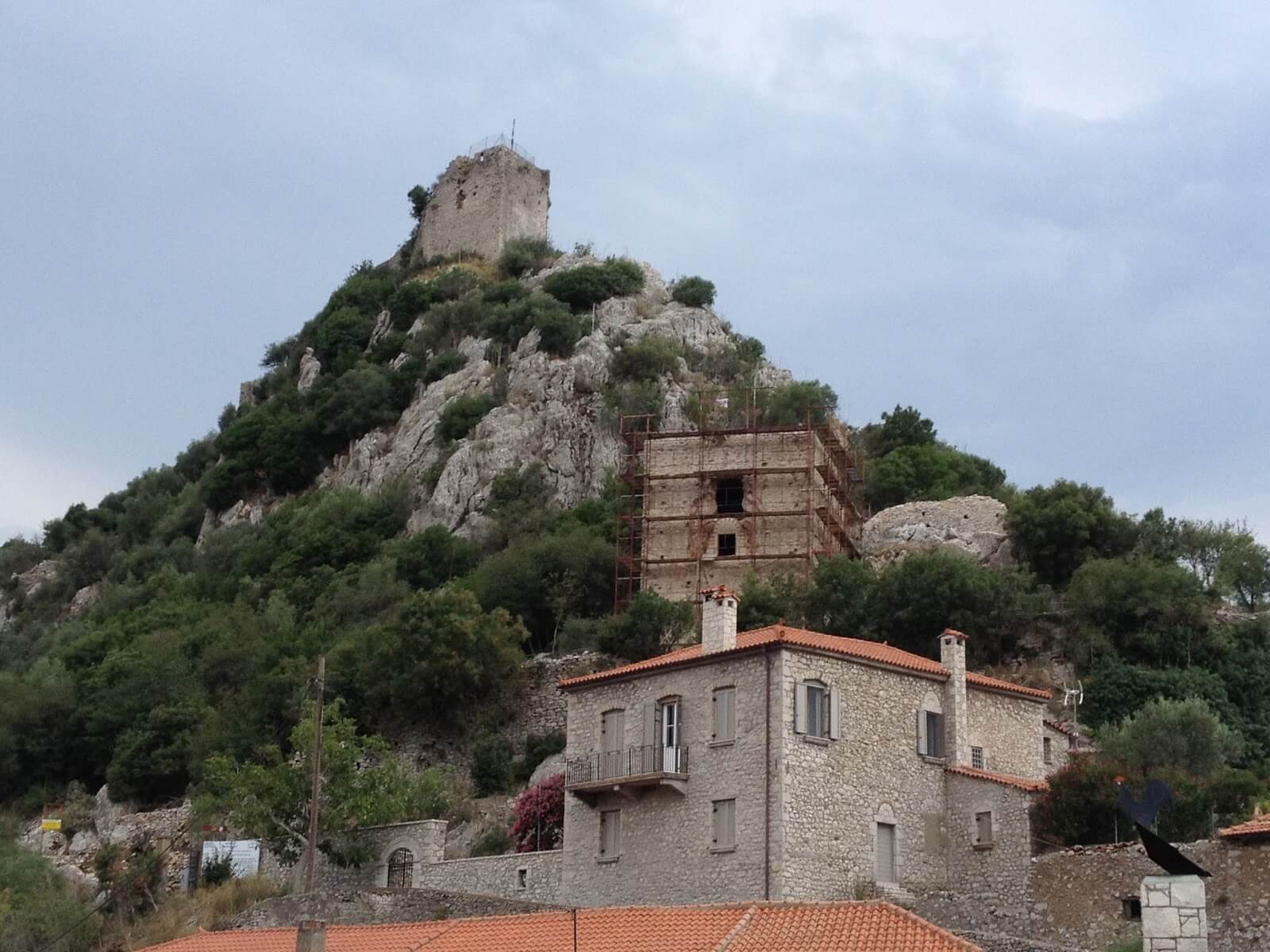 Castle of Karytaina is built on a steep cliff at an altitude of 700m., in the south of the village Karytaina. It is a medieval Frankish castle with a significant history. Important natural stronghold due to its strategic location and strangulated around the Arcadian mountains was one of the most important fortresses of the Peloponnese, both during the period of the Franks and during the Turkish occupation and the Revolution of 1821.

It was built in the 13th century (1245) by the French ruler Hugo (Geoffrey) de Vigier. In the years of Frankish Karytaina experienced its heyday and the castle thanks to its strategic position regarded as one of the most important in the Peloponnese even called “Toledo of Greece”.

In 1320 the castle acquired by Frank commandant Andronikos Paleologos when were added to it some Byzantine churches and monasteries. In the mid-15th century, it passed on to the Turks, to fall in 1685 and passed on to the Venetians and finally again to the Turks (1715) who kept it until the revolution of 1821, when, like all Arcadia, it was the revolutionary base to the Peloponnesians.

The outer part of the castle remains today in good condition, as opposed to the interior that is ruined. Recently it has begun a good afford to repair it. Inside are preserved some uncovered walls of a spacious room with many windows showing that maybe there were taking place the gathering of the knights.

Access to the castle is easy as the entrance leads to a well-maintained path starting at a point near the square of Karytaina village. At the right the path leads to the gate of the castle, there is the bust of Th. Kolokotronis and the monument below is dedicated to Liakos Liakopoulos from Paloumpa who fell heroically during the siege of the castle on 27.03.1821 (battle of St. Athanasius).

Pliadon Gi Mountain Resort & Spa is situated in the area of Kato Trikala in the county of Korinthia. It constitutes a truly valuable choice for your stay while visiting the Peloponese in the south of Greece and it is where you will experience a peaceful ambiance in perfect marriage to affordable luxury. Constructed according to the local architecture and bearing specimens of the Peloponnesian culture, it constitutes a natural extension of the village while, in parallel, it incorporates luxury services that have elevated the accommodation standards of the whole area. Pliadon Gi Mountain Resort & Spa is an all time favourite to those who wish to indulge to a peaceful getaway either during the winter or even in the summer months, since it combines both mountainous landscapes and a sea front at very close distance. This magnificent stone-built “village” is embraced by the nature’s wild beauty at a mere 1 ½ hour drive form the capital Athens. Spoil yourself to its beautiful surroundings and allow the well-trained staff take care of you. Take a deep breather and forget of whatever causes you anxiety and stress. This experience within the mountains has absolutely nothing in common with the vividness of a Greek island. The beach of Xilocastro […]

Seaside Boutique Hotel ‘Kyani Akti’ in Xilokastro is steps away from the sea, with a panoramic view of the Gulf of Corinth. Built in the early 1900’s, this charming Hotel was fully renovated in 2015 with new and modern amenities throughout. Situated by the sea in the heart of this beach and resort town, at Kyani Akti you will enjoy a most pleasant and relaxing stay; a soothing break from the ordinary. You have the option of selecting any Suite with a view of downtown Xilokastro, or any Suite with a seaside view of the ample Gulf of Corinth. The rest you can leave to us, and we will ensure a most comfortable stay. Hotel Kyani Akti offers Eight (8) Suites of which accommodate as follows: Six (6) Double Beds-These Suites each offer a King-Sized Bed Two (2) Triple Beds-These Suites each offer three (3) Single Beds, Oversized. Such beds can remain connected or separate, according to your preference. You are welcome to choose any Suite with either a downtown view or a seaside view: Seaside View Double Bed Suites overlook the Gulf of Corinth Downtown View Double Bed Suites overlook the retail and dining corridor of this beach town. […]

Opora Country Living is a new suggestion for your holidays, a farm within an area of about 30 acres with safe and sound infrastructure in a unique location.

Explore the countless sites of natural and historical interest around the prefecture of Mani, while enjoying a comfortable stay at the elegant and fully equipped studios and apartments of Melitsina Village Hotel.