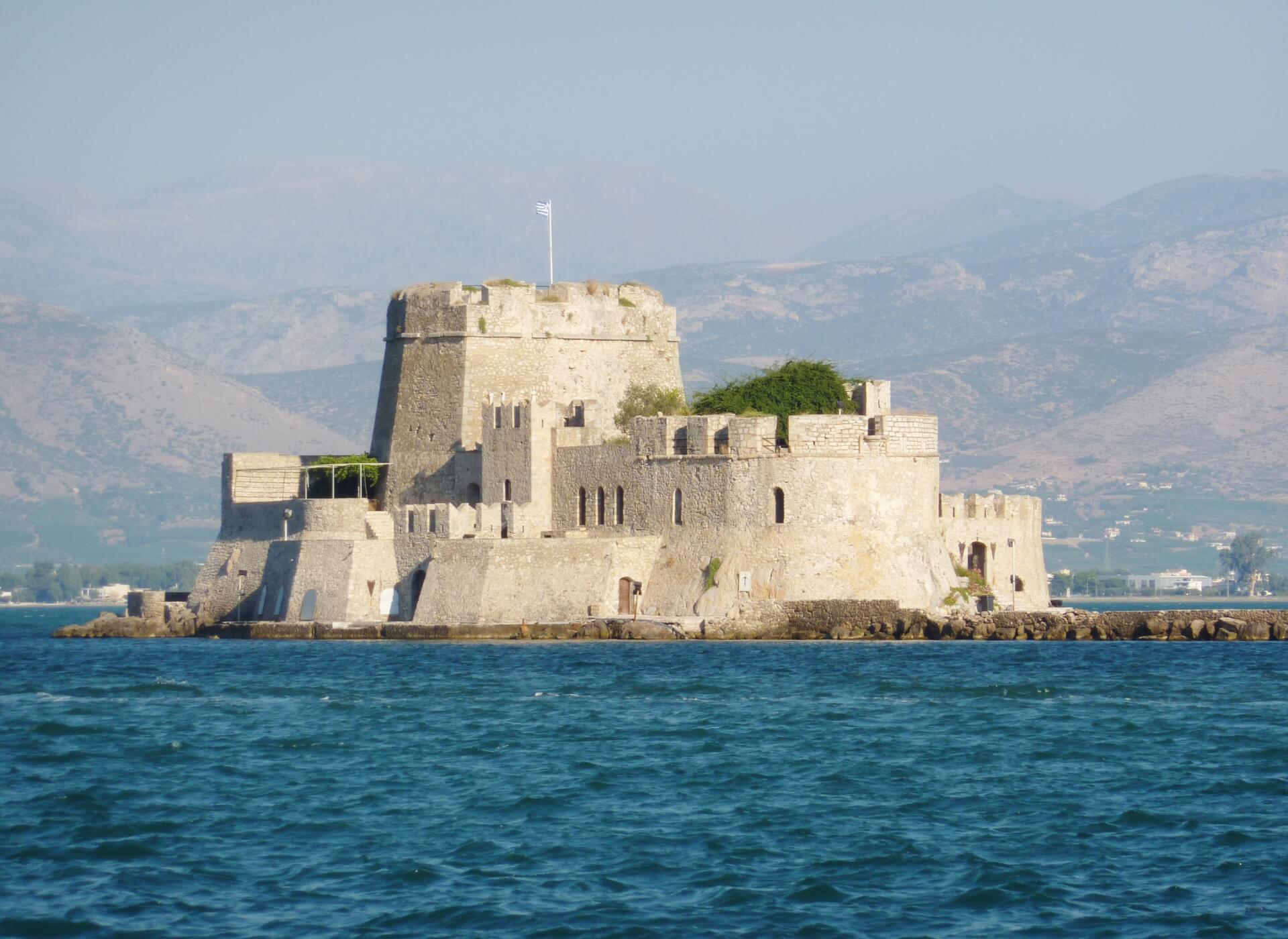 The fortress in the sea, which became known by the Turkish name Bourtzi, that tower is the city of Nafplion trademark. Initially in this island, located in the middle of the city’s port, there was a Byzantine church dedicated to St. Theodore.

The Venetians realizing its strategic location to protect the harbor, built around 1473, on this rocky island, a tower. Italy architect Antonio Gambello, who had undertaken the construction of the Castle of Toroni, designed the fort, which was completed by the engineer Mprankaleone.

The design of the fort is attached to an elongated shape of the islet. The center of the fortress occupies a tower in the shape of an irregular hexagon, with shaded cannons to either side of the lower level.

Internally the tower is three storeys and communication between floors was by ladders for safety reasons. Tin need water covered a large circular tank that was located in the tower basement.

The entrances to the north and south. Northeast had formed small bay, for safer access to the fortress. Among the epithalassiou fortress and the breakwater was narrow passage closed with chain, for the security of the port from enemy ships.

The fort bears several modifications and repairs carried out at different times. The Turks surrounded the Bourtzi with the so porporela, ie underwater barrage of stones, so as not to allow large ships to dock.

Him 18th century, the Venetians made additions to Bourtzi. Raised the central tower and almost the entire island was covered with fortifications.

During the Greek Revolution, the Bourtzi was known as Kasteli or Thalassopyrgos. Here he found refuge in 1826, for a short time, the Greek government when the rebellious nation was in a civil war.

The Bourtzi served as a fortress until 1865. After previous was the residence of the executioners who were making the executions of death row of Palamidi prison.

The Arxontiko Guesthouse overlooks Byzantine Mystras and the valley of the Evrotas river, in addition to the city of Sparta and the surrounding villages as far as Mount Parnona, whereas in the West, it enjoys wonderful views of Mount Taygetos.

Mare Dei Suites Hotel is located in the beautiful Southern region of Peloponnese near the village of Skafidia and town of Pyrgos in the Elis region. The hotel has an eye-catching setting of nature offering a panorama of the Ionian Sea, the sea of the ancient Greek Gods, a fact to which it owes its name. The hotel overlooks a magical little bay while harmonically resting on a naturally green hillside. On the golden sandy beach our guests will come across by natural springs and beautiful rock formations as well as natural argyle. Discover the elegance of the Mare Dei Suites 4-star Hotel and enjoy a memorable experience while being pampered in a beautiful natural environment and by our personalized services. Our 25 Suites can accommodate up to 4 guests and our Onar’s Waterfront Villa with Private Pool up to 5 guests. Most of our rooms enjoy unimpeded views of the daily journey of the Sun and the Moon until they disappear into the deep waters of the Ionian Sea. All that while listening to the soothing sound of the soft waves and the salty breeze touching the skin. In Mare Dei Suites Hotel each spot will give you the […]