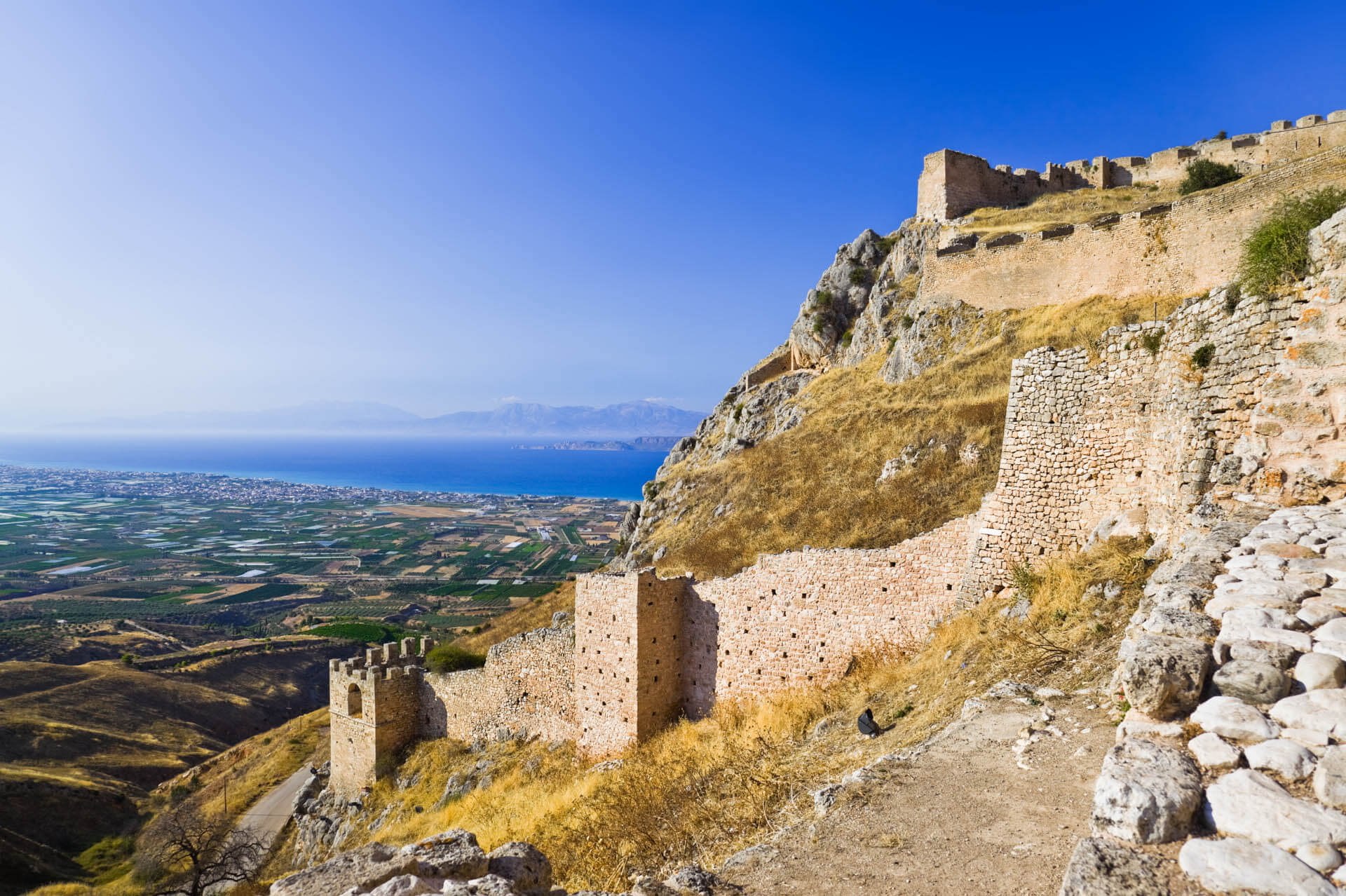 Castle on the cliff Acrocorinth, which rises southwest of Ancient Corinth. It was the fortified citadel of ancient and medieval Corinth.

The fortification ensured by three enclosures, which are separated by walls, reinforced with towers and bastions. Three majestic pillars leading to the interior, where there are ruins of buildings of all time. Divided parts of the wall of classical antiquity.

The first fortification of Acrocorinth dating from the late 7th-6th century BC. the years of tyranny of the alveoli. Extensive classical masonry dating from the 4th BC c. From 338 BC passes held the Macedonians, which expelled Aratos and the city became a member of the Achaean League.

After the destruction of the Av. Mommius (146 BC), the wall was rebuilt with the same ancient material from Julius Caesar (44 BC). The first Christian phase is distinguished in the repair of classic wall belongs to the reign of Justinian (6th century.). Reconstruction and additions of new forts executed on Early and Middle Byzantine period (7th-12th cent.).

In 1210 the castle was occupied by the Franks (Othoma de la Roche & Gol. Villeordouino). The lord of Nafplio Leo Sgouros committed suicide, horseback from the walls.

In the mid-13th century. made extensive repairs of the walls. In the early 14th century. Castle granted to Prince John Gravina and later in N. Acciajuoli who repaired the old fortifications and added new ones.

In 1395 the owner of the castle became Theodore Palaeologus, who for economic reasons sold it to the Knights, Knights of Rhodes, who hold it until 1404, when it regained the Palaeologus. In 1458 Sultan Mehmed II bent the resistance of the Byzantine commander Matthew Asan and seized the Acrocorinth, inside which were built four mosques.

In 1687, the Venetians occupied the castle and executed fortifications completed in 1711. In 1715 the Acrocorinth delivered after a siege by the Turks. In 1823 Corinth released and Avdoulach-Bey, gave the castle to the Greek troops.

Thirides hotel is the ideal choice for organizing a christening or your wedding reception, and receiving your guests. With an elaborate, particularly elegant hall, as well as a properly configured outdoors by the pool and the gardens.

The breathtaking view from the cafe and restaurant of the Ermis Shelter hotel will combine drink your coffee and delicious, traditional, local food with beautiful images of wildlife.

The Grand Chalet is built on two levels and can accommodate in its three independent bedrooms and in the attic up to eight guests.