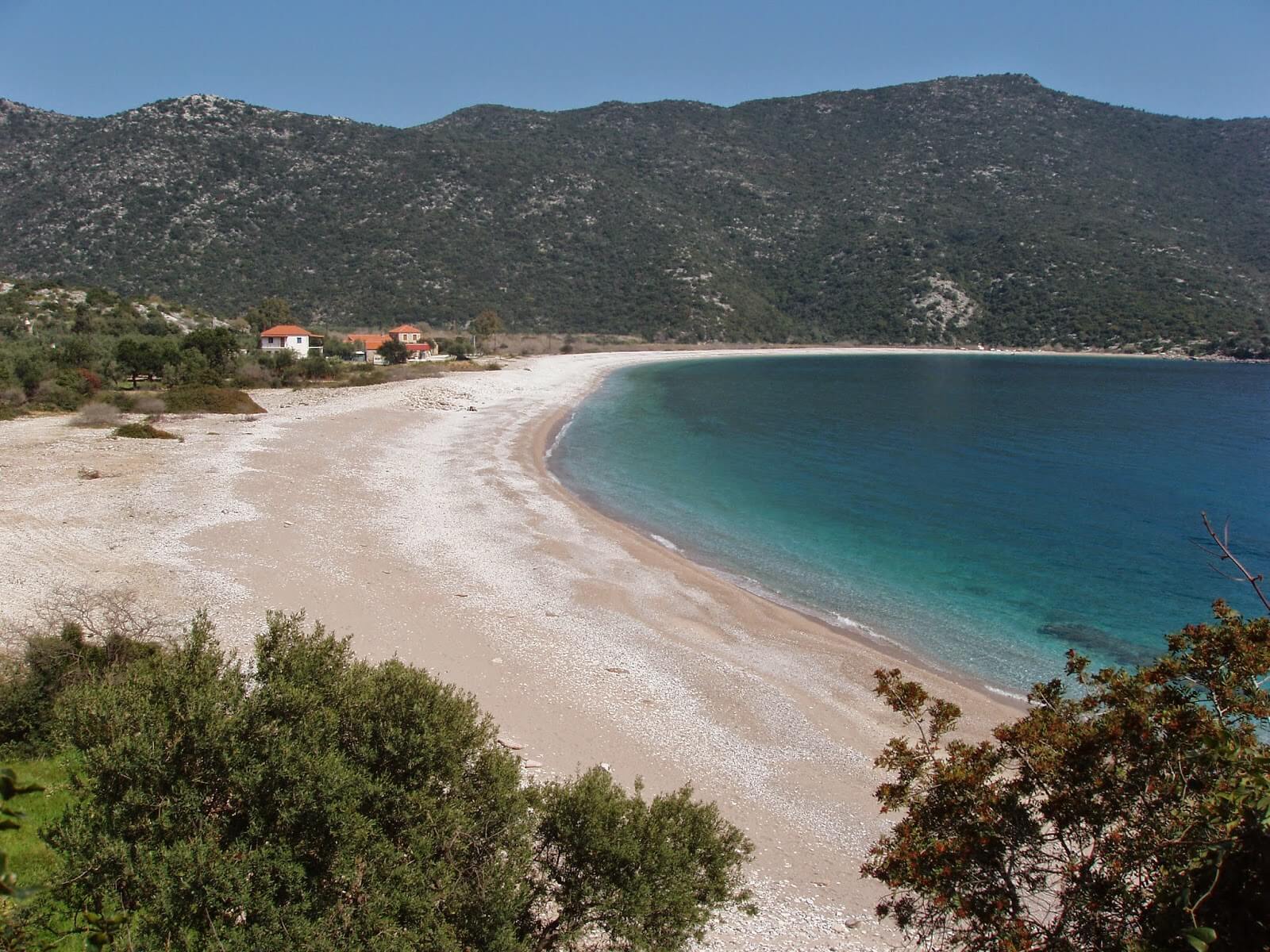 Poulithra is a picturesque seaside village, 9 km. Southeast of Leonidio, the capital of Kynouria in Arcadia, and south of Plaka.

It combines harmonically mountain and sea, 2 km. From the beach and enhanced by the presence of the beautiful natural environment that surrounds the area.

According to the 2001 census, Poulithra – home of poet Ourani – has 598 inhabitants, the main occupation of which are agriculture, fisheries, livestock and tourism.

The village is famous for its picturesque houses that have kept their traditional character and architecture of the mansions is the so called “kynouriki”. It consists of two districts, one of which is an attraction in the summer period as testator pebbled beach.

It is necessary to mention the picturesque harbor with views of the surroundings. In Poulithra is the ancient city Polichni, often referred to by the historian Polybius.

The acropolis of the ancient city on the hill that stands beside the port of the village.Moreover, traces of ancient civilization are evident thanks to the ancient castle and the Byzantine walls that surround it.

Helydorea is a warm, stone built guesthouse, with views of the Corinthian Gulf and the Roumeli mountains, waiting to host your short, or longer mountain getaways.

Xylokastro is a small, beautiful, picturesque town, situated in the North of Peloponnesus, at the Corinthian Golf. It’s a place, which excellently combines the mountain and the sea, the cosmopolitan and the simplicity. It offers some fantastic beaches for swimming and sea – sports, and it’s home of one of the most unique pine tree forests in Greece, the famous «Pefkias». The 4-star Arion Hotel , situated on Pefkias beach in Xylokastro, features a restaurant a la carte, Spa with sauna, Hammam, hot tub, as well as an all-day bar. Surrounded by lush greenery, it offers recently renovated rooms and suites all equipped with free Wi-Fi throughout, satellite television, telephone, air conditioning, mini bar, hair dryer, safe. The hotel is fully renovated, and opened in July 2012. The Hotel offers you the following services and facilities, to make your stay enjoyable, relaxing, and creative: full breakfast (American type buffet) from 08:00am, room service 24 hours a day, wake up calls, room rental. Arion hotel is located just ~115km from Athens by car either by bus, from Kifissos central bus station or by train with Proastiakos. We can offer free transfer from/to train station upon request. Arion hotel is located in Pefkias, […]

The Capari Suites location is in the greenest part of the island featuring the most excellent views overlooking the Laconian Gulf where all the sunset pictures are derived from in the Photography section.

Welcome to the brand new apartment complex “Abelia Villas” situated in Finikounda of Messinia. Our complex covers an area of 6 acres and consists of three buildings. Each of them has two floors, while the whole complex offers a clear view of the Messinian Gulf, the islands Schiza and Sapienza, and the cape Venetiko. Our comfortable rooms and luxurious villas provide privacy, exude cozy warmth to visitors, and create a pleasant feeling with their soft and modern color combinations, their elegant and minimal décor and their luxurious amenities. The complex offers three different types of accommodation: the Family Suites, the Junior Pool Suites and the Junior Suites. All the suites are autonomous and fully equipped. They have spacious terraces, where you have the chance to isolate, unwind, and relax, gazing at the beautiful blue sea. Comfort is our top priority and is ensured by COCO-MAT mattresses in the bedrooms and the living rooms. Finikounda is a quiet seaside village on the southwestern part of Messinia, between Koroni and Methoni. It belongs to the Municipality of Pylos-Nestor and has 677 residents. Finikounda is located 295 km from Athens and 60 kilometers from the capital of the prefecture, Kalamata. Methoni and Finikounda […]