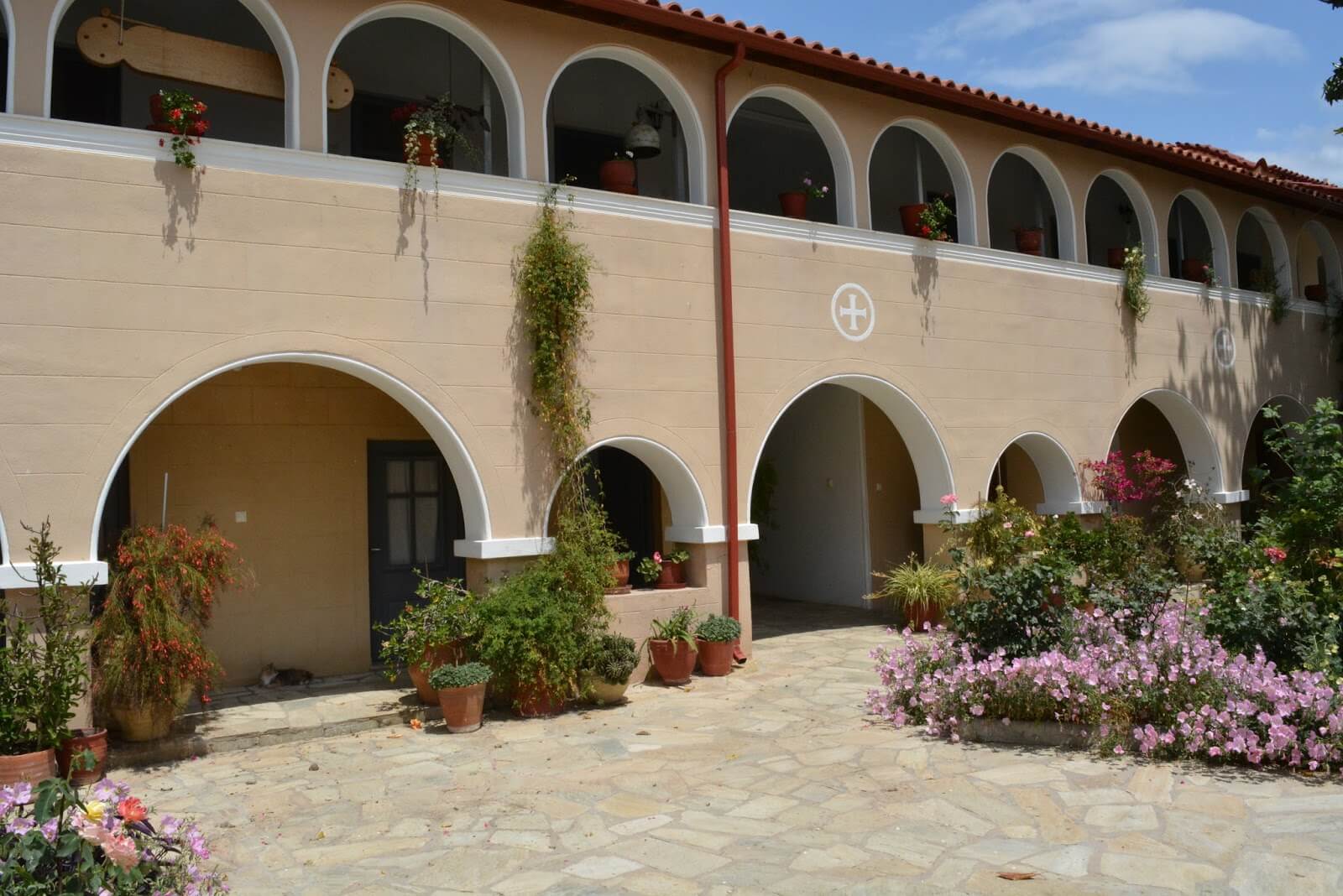 The Archangels Monastery is one hundred meters left of the old national highway leading from Ligourio in Corinth, in the village of Dimena municipality Epidaurus.

This monastery is situated beneath the imposing mass of Mount Arachnaio, which is the natural border between Argolis and Corinth. Very close to the road an artistic circular shrine, with a tiled roof, notifies the passerby on the existence of Archangels Monastery.

The monastery was built around the mid 15th century by a team of monks who came down from the mountain monastery Kalami. From the temple and the original buildings of the monastery does not seem to exist today, only part of those who relied on the first renovation of the monastery 1593.

It seems that the original buildings were made of base materials not survived time and weather conditions, since no mention of an earthquake or other destructive energy. Lifetime abbot, was appointed by the Patriarchate, the monk Damascene thanks the zeal, diligence and afford whose monastery was renovated.

The sorority took the baton and continued the life history of the monastery in the fall of 1945 with general manager monk Theoklitos Samiotis. In November 1949 he took igoumeneia the Christonymfi Panayotopoulos until May 2006 that died.

The old church of Archangels Monastery was demolished in the year 1945 and in its place was built the present church in the care of female brotherhood of the monastery. The new temple, compact style is Byzantine cruciform with a dome.

Later to save space, added to the original building is a narrow oblong vestibule, which removes the edifice even more than the Byzantine models. However, the present church of the Archangels is very nicely decorated and ideal for the daily prayers of the monks and accommodation of visitors.

The monastery accepts all these years the endless stream of pilgrims. Hosts conferences and seminars, trippers, pilgrims, members of the scientific and religious associations and continues to be an attraction and benchmark abbess Makaria Mastrogianni.

The rooms and suites of the Theophano Art Hotel are decorated with various works of art and authentic antique furniture, offering to guests a pleasant stay, tranquility, and warmth, similar to the living tradition of the Byzantium.

Our Mansion is rebuilt on the old Byzantine foundations around 1750 and for hundreds of years continuous to be an impressive and majestic mansion that will not stay a moment forgotten by history, since it will host officials of the Ottoman Empire and, following the revolution, for 100 years ago, the historic family Ritsos. In 1926, during its conversion to oil mill, a small addition was built to the north and since acquired its current form. As oil mill operated until 1960 and recently in 2004-2008 renovated fully guided by absolute respect for tradition and history. Now, Liotrivi is a unique destination, full of absolute beauty and indeterminate historical value that gains the admiration of even the most well-traveled visitor. A variety of rooms and suites, all unique and individually decorated in their traditional status, fully harmonized with the environment, respecting the history of the Mansion but providing at the same time the temporary comforts of modern life, can offer you the opportunity to make your choice according to your requirements . Choose the one that charms you most and live a lifetime experience through our unique hospitality. Flavours that will delight you, plucked from traditional recipes of our town and from the purest ingredients of Laconic land, cooked […]

Elite City Resort is a luxurious complex, built at the foot of Taygetos and built in accordance with modern trends and requirements, the sole purpose of satisfaction and your convenience.

Situated in the village of Omales, 1 km away from Areopoli, Antares Hotel Mani offers stone-built accommodation with furnished balconies overlooking the sea. It has a charming stone-paved courtyard with olive trees. Rooms and suites at Antares combine traditional Mani architecture and contemporary elements. They come with a flat-screen, satellite TV, electric kettle and mini fridge, while the bathrooms are equipped with bathrobes, slippers and hairdryer. Wild flowers, plants and herbs of the flora of the Mani region compliment the garden and inner courtyard, where a freshly prepared, Greek breakfast is served. Antares Hotel serves as a convenient base for exploring the nearby scenic villages, such as Limeni at 5.5 km and Itilo at 6.5. Within 11 km, you can also visit Diros Caves. Free Wi-Fi throughout and free private parking are provided.